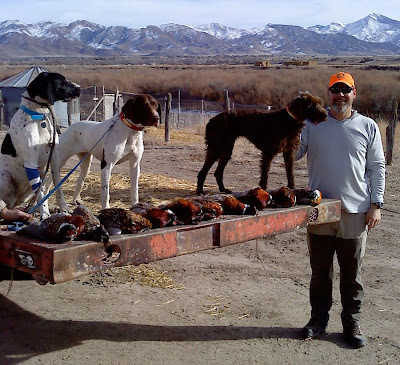 Another upland bird season is behind us and the season ending ritual of the canned hunts is upon us (released birds on private property). In Utah the private game preserves are allowed to stay open until the end of March. You can get a couple of months of this type of hunting after the wild bird seasons have ended.

My brother found a great place out in Lemington Utah that has provided us with some pretty fun hunts. It's called the Mc Ranch. They have a beautiful place along the Sevier River. Its a pheasant and chukar operation. The terrain provides the birds with good cover so if you don't get on them the birds have a good escape route across the river. Which is kind of nice and adds to the challenge of the hunt because then you have to cross the river and track the birds down. The pheasants are roosters only so thats nice. So far the birds have been good strong flyers and act pretty wild. The staff is very friendly and accomadating. Overall we've been very pleased.

Personally, I would much rather hunt wild birds. I love the challenge that wild birds provide. Whenever a bird is bagged it is such of a victory. Wild birds are the best teachers for young dogs and provide all the fun and challenge that hunting should be.

In Utah the last species of the upland bird season is the chukar hunt. The season usually ends around the end of January or the first part of February. I personally have not had a lot of success chasing chukars. Although we go a lot and usually see a covey or 2 when we go, we don't put many in the bag. It can be frustrating for both dog and hunter. But the chase is still great fun. It's a lot of hiking, watching the dogs work and some difficult shots all in difficult terrain. Hardest bird hunting there is in my opinion. Can't wait until next year to do it all over again.

In contrast to that, these preserve hunts do have their place. One thing is they can be great for the dogs. As long as the birds are strong flyers and have good survival instincts it can really help a dog along. If the birds are not up to snuff you might as well leash your dog and go home. There is nothing worse than getting into released birds that are weak, won't fly or have no survival skills. If the dog has a strong prey drive it will figure them out pretty quick and will catch the birds themselves. That's about the worst thing that can happen to a young pointing dog. Its happened to me and it really created some problems for my dog. It really soured me on this type of hunt. In hindsight I should have ended that bad day much earlier than I did. But if you do find the right place with good strong birds and good terrain it can make for a very enjoyable day. 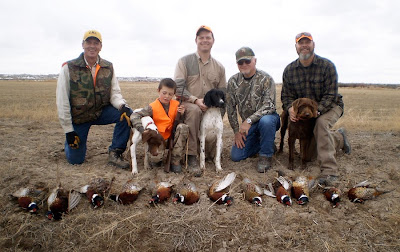 The reason a good quality canned hunt can be great for young dogs is that they get a lot of bird contact. The birds usually hold well for the pointing dogs, are usually shot on the flush so the dogs get the opportunity for a retrieve. You can watch a dogs confidence grow with these easier birds. It's good to end the hunting season on a positive note rather than a skunked day with a bag full of empty shells. The dogs don't know the birds are released and they are just as excited to point a farm raised rooster as a wild one. The end result for them is the same. The amount of bird contact is much more than what they usually see in the wild. (At least what I usually see around here in Utah) And the biggest plus is it creates good training opportunities to help your dog along. You can concentrate more on the dog than the game and really hone in on what your dog needs. Plus its great fun. It's kind of like the opening morning of the pheasant hunt when the birds aren't running and flushing wild yet. Not near as rewarding as the wild birds but still fun.

Another positive is we are able to give some family and friends the opportunity to experience our sport that usually wouldn't have the opportunity. Those that haven't done a bird hunt in years because they are unable or unwilling to battle the terrain where we find wild birds or just don't hunt anymore because it's not like he good ol days. Have had some great times on these preserve hunts. It also helps with the cost to have more people paying for the birds.

The best part is we are able to take our dad hunting. He bought us our first shotguns, used to drive us all over the state, and fed our dogs so we could hunt when we were younger. He and my older brothers introduced me to bird hunting. A little payback feels very good. 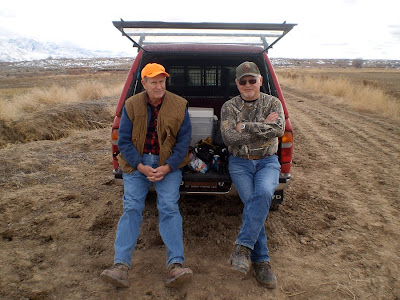