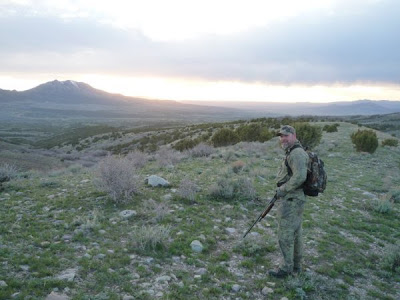 I enjoyed my very first turkey hunt this spring. Interesting birds with interesting habits that I've really enjoyed learning about. I have a long way to go and much to learn but so far it has been a lot of fun scouting these birds trying to create opportunities to take one.

I went out on the opener with my brother Shawn and brother-in-law Chad. It was a long day with not much action but we did get one Tom to answer to some cuts in the afternoon. We were able to suck him in but not close enough for a shot. It got our adrenaline pumping and since then I've been hooked.

Late in the day Shawn had left so Chad and I separated from each other in an area that had a lot of turkey sign. We sat still (took a nap) for an hour or so. After a while Chad made some hen calls and suddenly the whole forest came alive with turkeys. We had toms gobbling all around us. Chad made a few more cuts and called into himself 2 toms with a hen in tow. They came close enough that Chad was able to take a shot and got himself a real nice bird. I sat there the whole time hoping that a tom would come within range but none ever did. Congratulations Chad on a nice hunt. 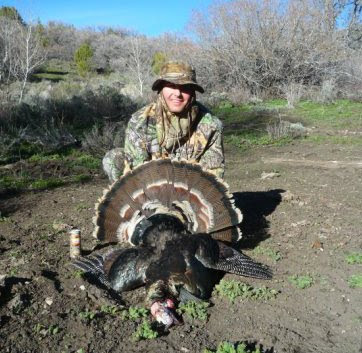 We went out a couple more times moved some birds but never had an opportunity for a shot.

Last Saturday it all came together again. Shawn, his son Michael and I got out to our spot at first light and some toms were already gobbling. We snuck in on them and got pretty close without being detected. We picked our spots. I went high while Shawn and Michael went low. We had good positions if we could only talk one of these birds into coming our way. Shawn made 3 quick cuts on his box call and we got an answer. We waited a minute. Two Toms were still enthusiastically gobbling just below us. Shawn made 2 more cuts and then went silent. One of the Toms came up the hill gobbling the whole way.

A couple of minutes later that tom came into my view strutting up my side of the hill. I had a nice window between two heavy oak brush branches. He strutted for a moment but I held my shot, hoping that the other tom would follow him up the hill. I had my bead on him and waited for a few more seconds but nothing else seemed to be happening. I was pumped, my heart was pounding, I was trying to control my breathing as I looked down the barrel at this beautiful bird. I decided this was my opportunity and that I couldn't wait any longer and took the shot. It was a clean kill he went down quick. 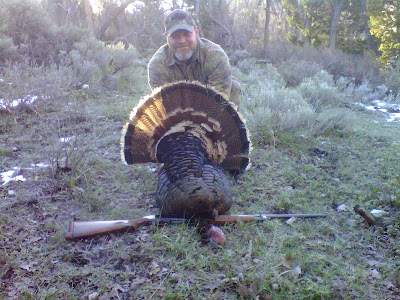 After things settled down and we decided nothing else was happening I went and got my bird. It was a happy moment to take a bird my first year out. I paced it off and estimate that it was about a 25-30 yard shot. I took him with my old 20 gauge loaded with winchester Xpert turkey load 6's. What a great hunt. I'm so grateful to have had the opportunity. These birds are amazing beautiful creatures. After holding him and seeing his beauty up close I had my normal meloncally moment that occurs whenever I take an animal. Its a combination of elation to have killed and taken the animal with a sadness that this rambunctious, gaudy tom will never strut again. I pray he was able to pass on his genes to the next generation so that his memory will remain in those mountains as long as turkeys strut across its hills. It does the soul good to dip into mother natures well and occasionally come up with a gem. We need to respect what we are doing as hunters and never abuse it. It was so much fun. I cannot wait for next years hunt. 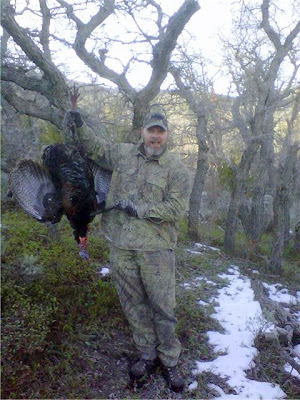 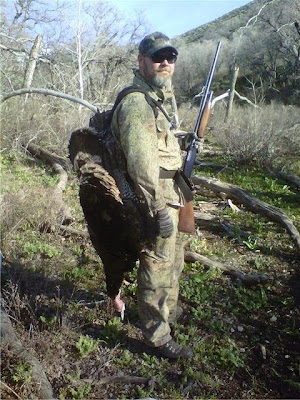