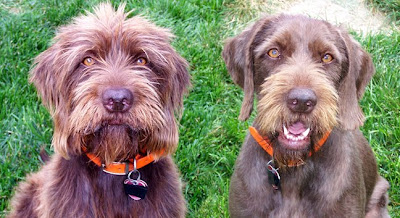 Shaved some of the extra "udel" off my pudelpointer. She looks like a totally different dog. Takes a little getting used to. Personally, I like the "before" look better. She reminds me of a muppet teddy bear or something with all that shag. It adds to her personality and uniqueness. I do admit that it's much easier to take care of with a trim. My girls wanted me to take off her beard and mustached too but I cant do that. I have to leave a little "fringe".

I used to tell myself that I would never cut Hazel's hair, but after a couple scouting/training days last summer, she became so covered in green, sappy hitchhikers that she couldn't even open her eyes. On one of those days the poor girl came running up to me crying and nearly knocked me over because she was so blinded by all the burs on her face. Hazel is a hard charging dog. She go's where the birds are and she wont let some stickers and burs get in her way. A haircut was the only logical option. I gave her a haircut last year right before bird season and it worked out perfect. We didn't have near the bur problems we usually encounter at the first part of the season in the mountains. By December when we are chasing chukars her hair had grown back so she had a nice heavy coat for those winter hunts.

And with all that being said I have ordered a Llewellin setter pup next spring so I will be dealing with more burs and dog hair in the future. I guess I'm a sucker for the long hair. At least the setters don't have all the long hair around their eyes.

It's time to get serious about our training, conditioning and scouting. Bird season is only a little over a month away. Can't wait.
Labels: Bird Dogs