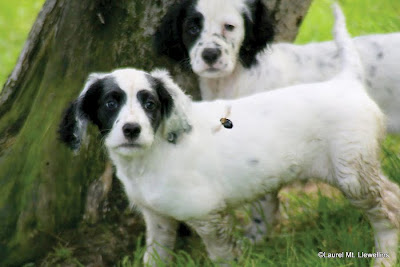 I am very excited and pleased to announce that we have a new addition to the family. I bought a Llewellin Setter pup a couple of weeks ago. He arrived via airplane on May 29th. I named him Chief and he has been a ton of fun. I contacted Laurel Mountain Llewellins in Pennsylvania about a year ago and told Michelle Lazur what I was looking for and she suggested a particular breeding. I jumped, and I've been waiting for that litter ever since. It came at just the right time and the litter was just beautiful. I pined over my choice but now that he is here I'm very happy with him. Chief's a very handsome little llewellin from awesome bloodlines. He should be a great hunting companion and a great pet. It's going to be a fun summer and I'm looking forward to the coming hunting season and bringing this pup along. 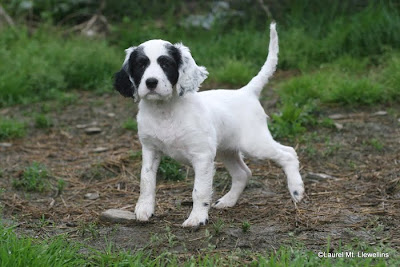 You may ask why would a versatile/continental hunting dog guy like myself get a Llewellin Setter? It is simple, I've always wanted one. Not necessarily a Llewellin but I've always wanted a setter of some type. The last few years since I got Hazel I knew my next dog would be some type of setter. I've been studying and looking at all kinds of dogs and breeders for years. I looked hard at some Ryman types setters (or what is nowadays considered a Ryman type) and didn't love what I saw. Good dogs but not for me. I looked at some english setters but the ones I saw and met were great dogs but I felt like they were too jerky and lacked personality. I looked at some Irish and Red setters and liked about a third of what I saw. I really liked a Gordon setter breeder in Minnesota but I don't know how that black coat would do out here in the west. Very cool dogs though, I would own one. Eventually I finally went with the Llewellin because what I saw was a lot of consistency throughout the breed and like the pudelpointer they are still pretty much exclusively hunting dogs. I couldn't find much negative at all about them and I just think they are so beautiful. Every Llewellin is unqique. These dogs look like those dogs from those hundred year old bird dog paintings that I love. I looked long and hard at many breeders and finally approached Laurel Mountain Llewellin Setters in Pennsylvania. These people eat, sleep, drink, live Llewellin setters. They hunt all of their dogs a lot and make that the priority. They only sell to hunters. I could not find anyone with the passion and love for the dogs as them. They want to produce happy, healthy, professional grade bird dogs. What is so cool about this breeder is you can logon to their website and see every pup they have produced in the last few year and they were all beautiful. Every person and reference that I talked to about these dogs gave such high praise that I felt like I had no other choice. Waiting an entire year to get your pup was a new experience for me but the breeding was right the time was right and it was so much fun watching this litter grow up and finally getting to pick out my dog. I watched my pup grow up via web streaming video and was sent tons of photos and info on each pup. So I was able to make a pretty educated guess on what I was getting even from across the country. It was a wonderful experience. 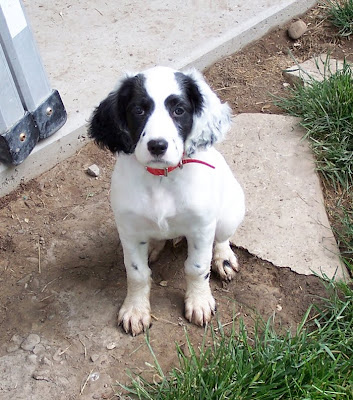 Chief is already very birdy and has a beautiful point. He has a good personality and is very fun and honery (as his breeder likes to say). We love him. Adjusting to a pup has had its challenges but no major damage or trauma has been suffered. Hazel doesn't quite know what to think about him but they have gotten along well from the start. She's getting better every day. She seems to like having a companion and has really helped the pup transition into our family. I'm sure time and some maturity on Chiefs part will help. 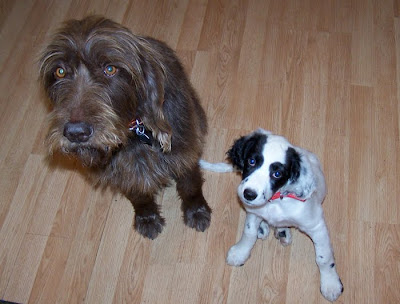 I will keep posting on Chief's progress throughout the summer he will be a big part of my hunting adventures and blog for years to come.
Labels: Bird Dogs Hunting LlewellinSetter