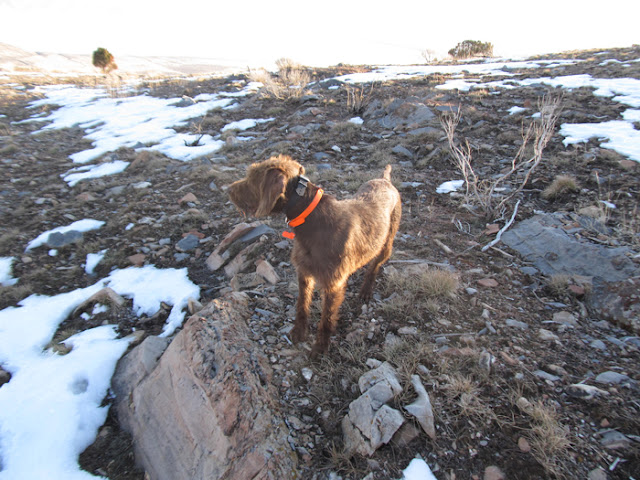 Taking advantage of my lack of interest in this years Super Bowl. I decided to go chukar hunting. My family was going over to my in-laws for a party and I figured why not use the time and get in another hunt before the season ends next week. Besides I could record in on the DVR. It was one of the most enjoyable days I've had this year. I witnessed some spectacular points and awesome retrieves. All under a blue sky followed by a crimson sunset with a full moon shining down on me as we finally got back to the truck. It was simply a beautiful day to be in the field.

I got to my mountain about 2:00 pm and started trudging up the mountainside. In about an hour we were in the area where I suspected the birds to be. Both of my dogs switch gears as soon as they were into a lot of chukar scent. All the way up they were just ranging out wide and far. They were hunting but I knew that the chances of us finding birds down low with the warm weather we've had lately were slim to none. As soon as we were within the last 500 yards of the mountaintop the dogs slowed down and their body language was telling me that we were in business. Birds were in the area. Once I caught up to the dogs there were tracks, scratch marks and chukar droppings everywhere. The adrenaline started kicking-in. Where I was sucking wind moments before, I marched up the last ascent knowing that birds could be anywhere.

Chief had the first find of the day. A beautiful point on a covey of about a dozen birds that were held up in a small draw among the deadfall. I called whoa and Hazel backed from about 50 yards above us. Chief held the birds beautifully and I was able to approach from the side. When the birds erupted I had a hard time focusing on a single bird (I need to get some prescription shooting glasses) and by the time I picked one out it was the trailer of the group. 5 ……( yes 5) shots later I was standing there dumbfounded that I didn't see that bird fall. I wasn't surprised I missed. Missing is par for the course, but I felt like I had caught that bird at least once. I gave the "dead bird" command just in case I just missed the fall, Both dogs searched for a few minutes to no avail. Dejected and feeling like I had failed Chief, we move around some rimrock in pursuit of that covey. Chukars will sometimes fly around a hill and it's possible to find them if you look at the same elevation on the opposite side.

As we crested the rimrock that was blocking my view of where the birds flew I saw chief flash point at what appeared to be nothing beneath a burnt juniper. Hazel was right behind him and stopped for a moment and then a lone chukar flew erraticly down the hill. The bird was obviously hurt and Hazel scooped it up in no time. I was so happy to get that bird. I should of had at least a couple out of the covey but I was glad to have dropped the one. Below is that bird. Chief seemed happy about it to. 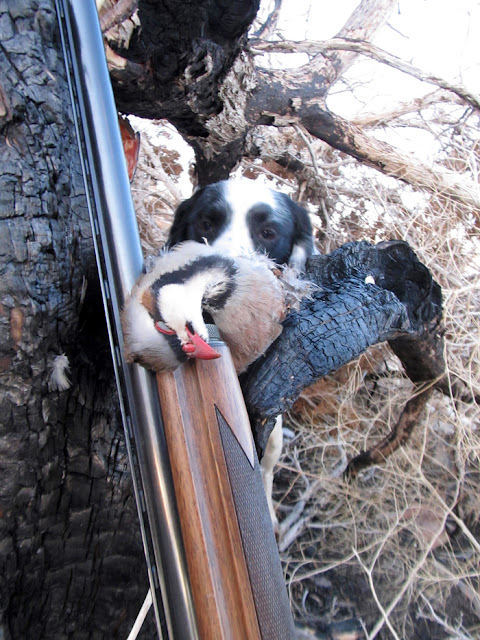 When I hunt this particular hilltop I usually approach from the south then work around the hill to the edge of a canyon and follow that ridge up and over the top of the mountain. Today I went down instead. The dogs wanted to go downhill so I decided to follow them and see what would happen. We worked back and forth down the hillside to a point where 3 canyons meet. This spot has been productive in the past and I hadn't been there yet this season so I was hopeful. I was watching Chief from afar because Hazel was a little closer and acting pretty birdy so my focus was more on her. I lost Chief for a moment and I became concerned because he was close to where I suspected the birds would be. Then I found him. He was holding a beautiful point and his sickle tail  was sticking up above the cheat grass. It was obvious he had found them. It was such a pretty site, I had to try and get a photo as I approached him. I took the below photo and was moving in for another one when the covey blew up about 10 yards behind where chief was pointing I dropped my camera and didn't get a shot. I picked up my camera and moved in closer to where they where. 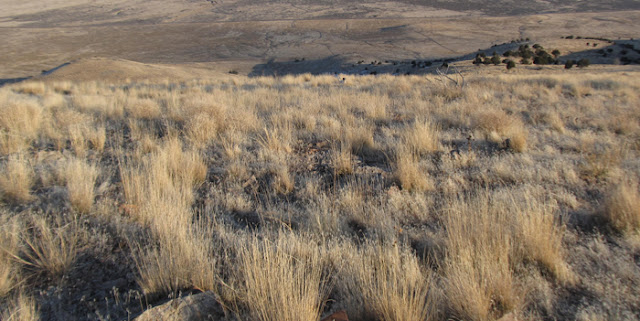 That's when Hazel came through the area. She slams into a point (photo below, I know its hard to see but that brown spot in the center of the photo is Hazel on point) soon after Chief had returned and was now backing Hazel. I reach again for my camera to take another photo and just as I turn it on another half dozen birds come up between us all. I dropped my camera again but kept focus that time and aimed at a single that veered left  while the rest of the covey went right. I got on it and made a long shot and saw the bird get hit and flutter awkwardly to the ground. 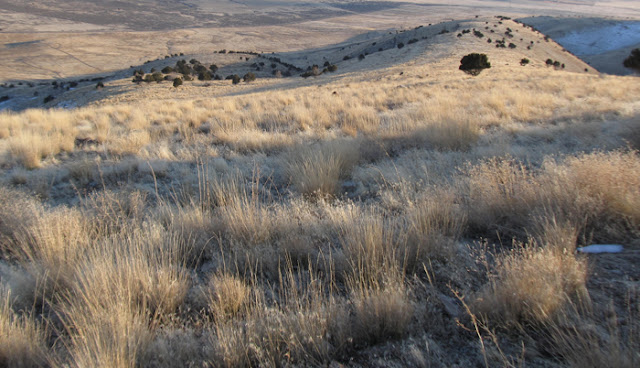 Yes!  I called "Dead Bird". Both of my dogs had followed the covey the other direction. But they broke the chase quickly and started hunting dead for the wounded chukar. Both dogs scoured the area to no avail. They widened their search to the point I didn't think they were looking for the bird any longer. I called both dogs over and gave the "dead bird" command a second time. Same thing but this time Hazel wanted to go North and soon I could tell she was working a track. She ran all the way over to the edge of the hill and disappeared over the edge with Chief in tow. About a half minute later I hear Hazel yipping and barking and I'm guessing they busted a covey on the far side of the hill. But to my pleasant surprise back over the hill came the dogs and Hazel had a nice young but very alive chukar in her mouth. She brought it to me and delivered it to hand. Apparently I had  just clipped this bird and broken its wing. So this bird hit the ground running and ran about 300 + yards across the hillside and down into the far canyon to hide from us. Cleaning the bird exposed that other than the broken wing it only had 3 other bits of shot in its right leg and thigh. I'm glad we found it. It was the retrieve of the year. I can't say enough about Hazel and her ability to find downed birds. She's awesome. 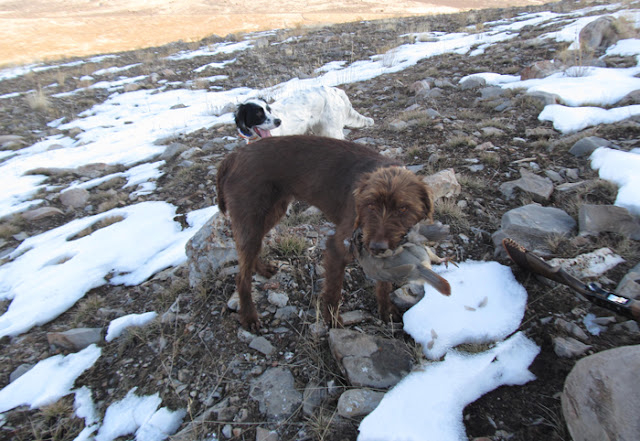 The sun was beginning to drop behind the mountain and I was a couple of miles from my truck so I hurried back up over the hill for the long descent. What a beautiful day. I know I only came home with 2 birds but I couldn't be happier. I was very pleased with the performance of both of my dogs. It was one of those days that it all came together. I felt justified. A good reminder of why I love this upland hunting game so much and why I put so much energy into it.

While walking the last descent during the last slices of daylight. I watched my dogs run down into the next canyon. I was about to call them back because a herd of Mule Deer were watching us from the next ridge. Hazel strutted low and cat-like towards the canyon bottom. Behind her Chief was drifting back and forth with his nose up in the wind. They both pause in unison and a few moments later covey of a half dozen birds flush cross the canyon and disappear into the dusk. Wow.

…………. and my camera was ok. Just a little scratched and dented. Like the rest of my chukar hunting gear. :)