We closed the season last week with a beautiful day hunting chukar in Utah's high desert. We worked very hard and climbed up some nasty stuff and then hiked into more nasty stuff. It was all very worth it.

For whatever reason we always seem to end the season on a high note. After we got to the right elevation we were into birds fairly consistent for the rest of the afternoon. My Pudelpointer Hazel was awesome. She had some great points and worked the mountain beautifully. It was one of her best outings of the year. 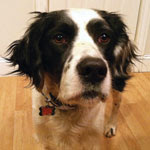 Chief, my Llewellin had a very nice long retrieve across a canyon. He carried that bird for a long time to get back to us. I was very happy with it. He doesn't get to retrieve much while hunting with Hazel and my brothers shorthair. It was nice to see him get on this bird that fast and carry it as far as he did. I estimate it was about 500 yards before he hooked back up with us.

Chief was born to hunt chukars. He has all the drive, desire and stamina I could ever want. For this being only his second year he is hunting very well. He always had the ability but this year he is getting smart and is starting to work the birds meaning he's getting above them and holding his points and backing the other dogs and is working well as a prime member of the team. And on top of it all he's tough as nails. He's a very solid dog. He's only going to get better and that's what has me so excited about him.

Although this years Chukar season wasn't very productive the rest of the year was really fun. This was the best year for grouse in several years, We had a good pheasant hunt and the only reason this years Chukar season was so tough was the weather. It's been very cold and we've had a lot of snow. It made some areas inaccessible so we were pretty limited on when and where we could actually hunt. But we got out enough and we had our moments in the field.  The dogs did great and I did ok. We found some great new areas to hunt and we learned some more things that will help us out. So overall it was a successful year. Theres only 7 1/2 months until next grouse season. Maybe we can fit in a couple canned hunts in the next few weeks.