After this past season I felt it was time to retire my trusty old hunting boots and start shopping for something new. I reviewed my pair of Denali Hunting Boots a couple years ago and they have continued to wear well and have done better than I ever could have expected. I wore these boots for 6 1/2 years and have covered countless miles and climbed, I don't know how many mountains and hills. I've worn these in the desert to deep snow to swampy bogs. These were/are my hunting, hiking, camping boots and they have performed stellar. I can highly recommend them.

Before this past season started the soles on my boots were gone. They were very thin and the tread was starting to peel back in several places. The soles weren't coming off they were just worn to the point that there was not tread left. What little tread was left was barely holding together. The timing last fall was horrible and there was no way I could justify to myself let alone my wife a new $300 pair of boots.  I told myself, "One more year and you can treat myself to a new pair."

The boots performed well enough but with the lack of sole my feet would hurt after long hikes especially after Chukar hunting. The season came and went and I cursed them on many occasions as I limped up the driveway after a long hunt into my house. Finally, the season ended and I put the old boots away and started my quest for my next pair.

I was planning on just buying a new pair of Denali's from Cabelas but wanted to hunt around and see what else was available. After some searching and reading a ton of reviews and trying several pairs on I had it narrowed down to either a new pair of Denali's or a Pair of Lowa GTX Hi's (SWEEEEET BOOTS, someday I will have a pair). I was trying hard to justify the extra 65$ for the Lowa's when I came across a screaming deal for a pair of Lowa Extreme Hunter's on Sierra Trading Post. With a coupon I purchased them for less than $200 retail on these boots is well over $400. They weren't exactly what I was looking for but it was too good of a deal to pass up. I jumped and I love them.
Note 12/04/20 : I've recently purchased and reviewed the Lowa GTX Hi's. See review. 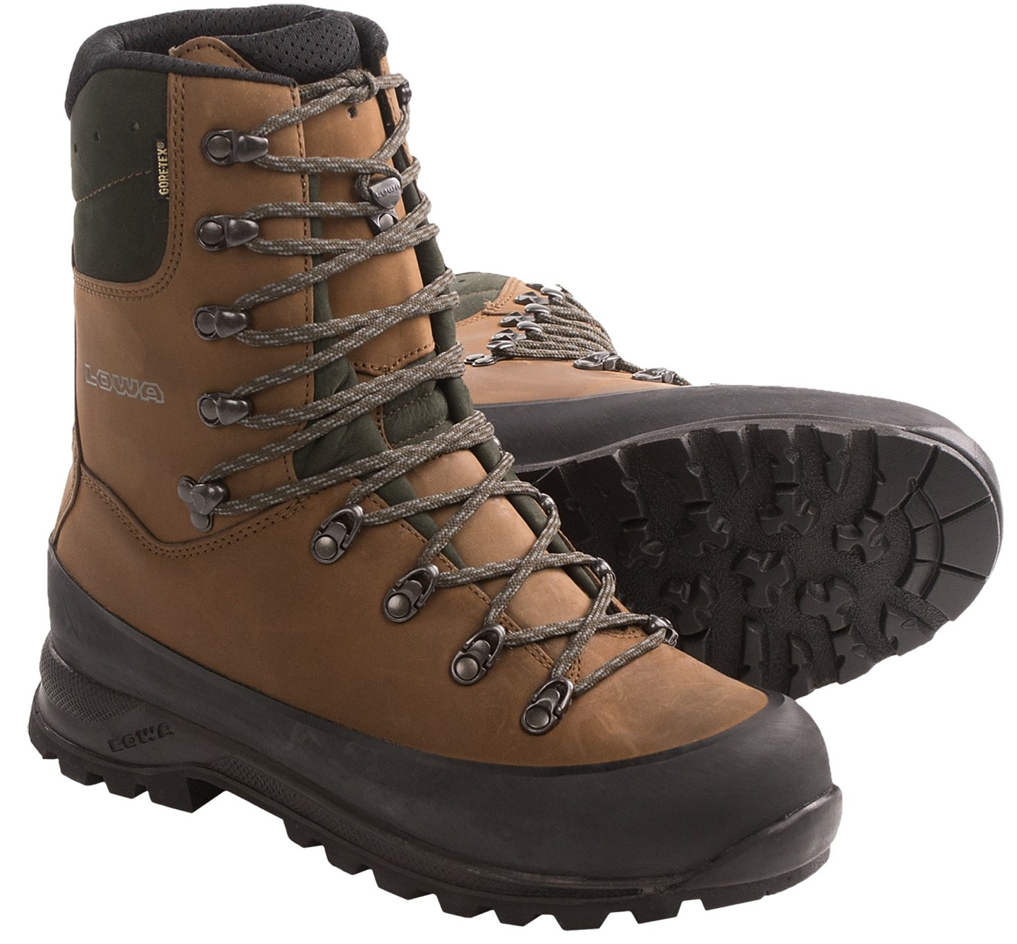 They are super nice boots but they aren't the perfect boot for what I do or what I need out of a hunting boot. There is a couple problems (This is my opinion, at this time for what I like in a boot, you may think very differently, I may think differently after a season using them) with them. This is not at all a knock on these boots, they are very well built and well designed, they are just different than what I've become accustomed to.

These are hard-core boots that are designed for extreme hunting at high elevations while carrying heavy loads. Think mountain goats and sheep hunting. So... I'm certain they will perform well for whatever a bird hunter can throw at them. Some of the terrain I chase chukars in can be comparable to sheep hunting. I'm in some rough, steep country so they most likely will be stellar and I just don't know it yet. I'm sure I will love them and get many years of hard use out of them.

1. They are 10" tall. That's 1 inch taller than my Denali's. Not sure if this is a bad thing but the little I've worn them they do feel a little binding around my calves. It's not bad but you can tell they are there. I'm sure after some getting used to and with some break-in time they will feel better.

2. They are insulated. Insulation can be nice in January but I don't need it in September. It's only 200 grams so I'm sure I can deal with it. It may be nice on those cold mornings climbing a chukar hill or those frosty morning pheasant hunts. Time will tell.

3. They are a little heavy 4.5 lbs per pair. That is nearly a pound more than my other boots. It will take some getting used to.

Other than that I'm completely stoked. Like I said they are super-nice, gore-tex® lined and have a ton of other bells and whistles.


So back to my old Denali's. After receiving my new boots I found myself looking for a cheaper, lighter boot for summer hiking and early season hunting. The more I looked I realized I'm not going to find what I'm looking for at the price I want to spend. So I pulled out the old Denali's and cleaned them up thinking that maybe I could get just one more summer and early season out of them.

I have to admit I didn't take very good care of them this past season. Normally I take very good care of my gear. That's how I get 6+ seasons out of a pair of boots. All season I figured they were going to be shelved after this year so why bother. After many hunts they were put away muddy and wet. After a good initial scrubbing I oiled them up and then water-proofed them again. I decided the only real major problem with them was that the soles were worn. The leather for the most part was still good. I do have some minor cracking over the toe box and the stitching was coming loose in a couple spots. Nothing that would mess up the integrity of the boot though.

So off to the local cobbler I went. After some haggling and some patience I just received back my resoled boots and I'm so damn happy with how they turned out. I put some new laces on them and slipped them on and it was like hanging out with an old friend. I'm grinning ear to ear. It's like getting 2 pairs of boots for the price of 1. I'm excited to see how the new soles will wear and much longer they will last me. Looking back I should of resoled them 2 years ago. I'm planning on wearing the new Lowa's most of next season and use these as backups but I wouldn't be surprised to find myself just wearing these old boots most days. Time will tell.

Update 12/3/14
So my prediction was right. These are still my go to boots. I've worn my Lowa's once. They are good but I haven't felt like I needed the insulation on most days. The resole has breathed new life into these boots and I'm really enjoying them again. Wore them throughout the grouse hunt and pheasant hunt. Last week I was wading in 3-4" of water for more than a few steps several times and had no leaks. I will admit earlier in the year I wore the waterproof treatment off and during a wet rainy day they leaked slightly. Still they are great boots. I'd totally buy these Meindl Denali's again.

Update 12/5/19
Since Cabela’s was bought out by Bass Pro Shops, they continue their spiral further into suckiness and continue to give me more reasons not to shop there. They no longer carry these boots or any other Meindl boots anymore. However, I was stoked to discover Meindl has a U.S. distributor and they still produce these boots. They are no longer referred to as the Denali and are now called the Vakuum Hunter. I’m excited because I returned my newer pair of Denali’s back to Cabela’s last year because one of the lace grommets pulled out. They were out of stock at the moment and I was told they should get new boots in within a few weeks. They never did get restocked.  I found out a couple months later that they would no longer carry them. I was pretty unhappy with that. If I would have known, I would of just repaired the boots. Since then, I haven’t been able to find a replacement boot that I have liked as well so I’ve been rocking my original pair of Denalis with a second resole on them. Yes, my original Denali boots are still going... barely. They’ve been great but the stitching is finally starting to come apart in a couple spots. That’s about 10 years of hard hunting out of those boots. I’ve loved, loved, loved those boots. Ordering a new pair soon. Link below.