Another Grand Day in the Forest 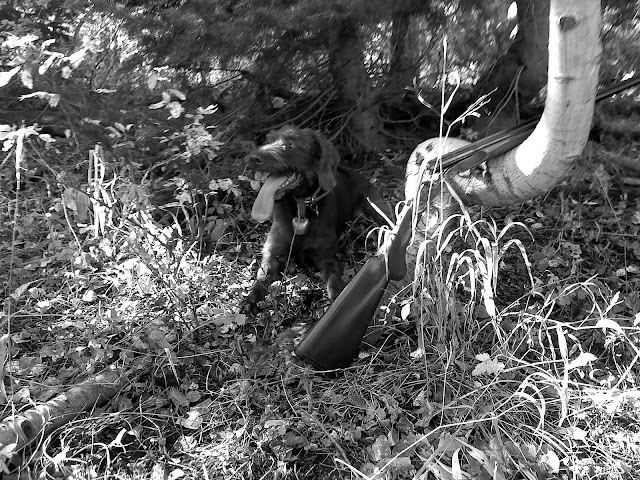 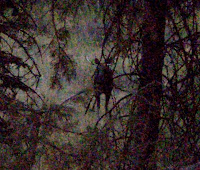 Hunting season is in full swing and I'm loving every minute of it. Although the days are way too hot we are still getting into birds pretty consistently. Hazel is giving me enough opportunities to keep me happy. She handled the bird in the photo above perfectly. She found it and stuck the bird long enough so I could move in position for a good push in a direction where there was a shot. She is improving all the time. Sorry about the crappy photo. I really need to remember a camera. The phone camera just doesn't cut it. This photo was so poorly focused I turned it black and white. I figured it at least has an old-timey vibe now. It was a good moment though so I'm glad I was able to capture it. 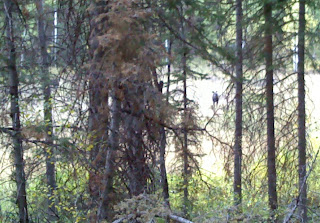 My daughter Lindsey came out with me the other night for a quick hunt after school. She did great! We had a good time. We saw a couple birds but never had a shot. We were on our way to one last spot when we ran into a family of moose. A large bull, a cow and a calf. I called in Hazel so we could watch them for a few minutes. The bull was not moving and he was giving me a pretty hard stare down. We were about 75 yards away in the thick trees but he was giving off a pretty powerful vibe to stay away from his cow and calf. We obliged and did an about face and called it a night. Nothing can stare you down like a full grown Bull Moose. Again I wish I had a camera. I wish you could see him and his antlers better. He wasn't "huge" but he was big enough. I'm hoping Lindsey was able to get a photo of him. If she did I will repost. Fall in the mountain west is pretty grand!
Labels: Bird Dogs Hunting