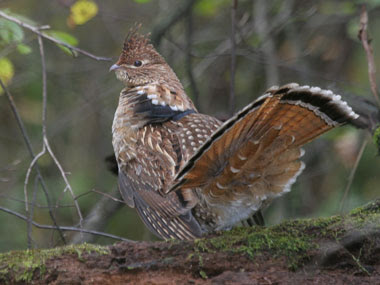 I'm happy to say that Bird Hunting season is only 9 short days away and I'm excited from what I've seen this year. There seems to be a good amount of birds (for Utah) in the mountains and this year appears to be promising from my perspective.

I wanted to rush home tonight and get a dove hunt in. The powers that be (work), didn't seem to want the same thing. I still managed to grab the dog and head up the canyon for a look into one of my favorite coverts. I call it "The Bank" because this place is "money".

Its a small little valley between two ridges. The ridge on the south is covered in old pine timber. To the north, Oakbrush so thick you can hardly walk through it. In-between is grouse heaven. Berries, berries and more berries. Thorn apples, elderberry bushes, mountain blueberries, snow berries, berries that I have no idea what they are. This is all surrounded by Aspens with young aspens growing thick on the East and West ends. A brook snakes down the south side at the base of the hill and cascades off a cliff into a steep ravine that is hell to climb out of once you go down into it. The trick is to get around and in front of the grouse before they run to the edge of that cliff and fly into no-mans-land. Then you can work up the ravine and pin them where they don't want to be. For whatever reason the birds all want to go towards that cliff and fly that way to safety. If you sneak into the covert from the west and cut off their natural escape route it can get fun. (Fun if your Pudelflusher feels like pointing that evening) I've only killed one bird ever at The Bank but I've definetly had many opportunities. Maybe this is the year. This sneak around them technique only seems to work once or twice and then the birds get wise and scatter up into the oak brush where its nearly impossible to get to them.

Tonight I didn't get up the mountain in time to sneak in the way I would of liked to but the birds were there. We had 5 flushes and 2 decent points. Hazel was once again pushing too hard on these birds. You would hear her bell stop (flush), yip yip, - stop (flush) yip yip- stop (flush), finally I yelled whoa. I got up close to her and threw my glove about 5 feet in front of her, she broke and I corrected her. and made her stand for a good 2-3 minutes. I released her and she immediately got birdy again, she busted through some oak brush on my right and her bell stopped again, I whoaed her immediately and tried to go up and around so I could see what was going on. Before I could get into position the bird took off. I was pretty happy with that so I called her over, watered her and told her what an amazing creature she is. We snuck down by the cliff and she got birdy again. After some milling around I was starting to think she was on old scent when slam a beautiful stretched out one legged point. The grouse got up and moved on us. It was a beautiful cock bird. He fanned out his tail and stuck out his ruff. He brazenly walked and then ran up over the hill right in front of us. It took a lot out of hazel not to bust him, she was shaking so bad. I whoaed her and waited a moment and snapped this crappy photo. "Turn on the flash next time Brett". 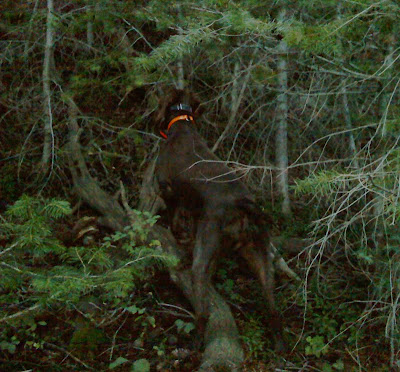 I released her and for a moment I thought we lost him but she found him. He took off with a perfect straight away flush and was gone. Good Dog Hazel! I'm going to save this covert for a special day. I love to chase grouse with a bird dog.

I came home to a great dinner of homemade eggplant (no meat) meatballs with pasta and sauce. Delicious. For desert I had a peach right off the tree. Thanks Amber for the awesome meals you provide us. Amber has a wonderful vegetable garden and were really enjoying all the fresh tomatoes, eggplants, peppers, fresh herbs and squash. I love this time of year. What a great evening. It was just what the doctor ordered.
Labels: Bird Dogs Hunting