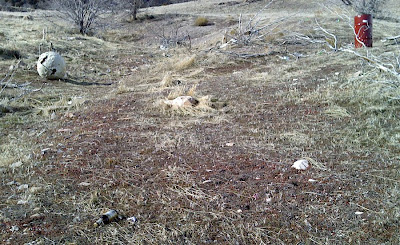 I apologize for the lousy photo but I was trying to illustrate how one of my favorite hunting haunts has become a dump for the idiots and pigs that I share this valley with. I took it with my camera phone in haste because someone was shooting nearby and the whistling ricochets were making me nervous to be in the area.

I'm not usually one to soapbox but I'm sickened by the ignorance and stupidity that I constantly witness here in Utah with people treating our public lands like a toilet. There's a spot west of our community that should be used like an outdoor recreation oasis but instead it has become a dumping ground / firing range.

I have no problem whatsoever with people exercising their 2nd amendment rights to own and shoot firearms, I'm a hunter and enjoy mine a lot. I love to shoot. I find it both relaxing and fun. But, the constant lack of education and firearm respect that I witness from people here is insane. Makes me rethink my attitudes on gun ownership. The local gun owners are sorely lacking some gun safety education.

The area I'm talking about is about 15 square miles at the base of a mountain where it meets a lake. It's got a number of flat valleys with a few rolling hills at the mountain edges and is covered with small gullies that catch the mountain runoff when we get heavy snow. The mountain rises pretty steep from the valley floor so up on the mountain is much safer but getting there can be dangerous.

You can go there any given weekend and see hundreds of people all target shooting. Many are safe. they find a good backstop to shoot into, they are careful and separate themselves from the crowd and are clean and pickup after themselves. But then there's the idiots who set up targets (trash) along the flats propped up in some sagebrush or along a road or wherever without a thought of what's going on around them or where their bullets are going. I could go off about the idiocy i've witnessed. People shooting into the same burm from opposite sides. People shooting over a gully while their kids are playing almost directly below them in the same gully. People shooting at targets at the base of a hill when there is people parked and shooting above those targets on the same hill. Its crazy, people and cars are lined up like a parking lot at the state fair shooting stuff between each others vehicles. It's amazing that there hasn't been more accidents or deaths.

What's sad for me is that this place has some excellent chukar and dove hunting opportunities but you feel like your running the gauntlet to get to the areas that you can hunt and feel safe. I had a incident last year when a moron was shooting directly up a canyon that I was descending. My brother and I had bullets whistling past us. We had to quickly backtrack up and around and come down a different way to get back to our truck safely. At the bottom I confronted the idiot and tried to teach him about always having a backstop and knowing about where your bullets are going. He apologized and moved his target but shouldn't any responsible gun owner know this? I gave up on even attempting to go to my favorite areas of the mountain because so many idiots like that are in the area shooting. The new areas are not as good hunting but at least I feel safer. Lately It seems the idiots have migrated to all areas of the mountain.

The other major problem is all the illegal dumping. People drag anything and everything you can imagine and just dump it, shoot it up and leave it. Appliances, TVs, computers, boxes, bottles, furniture, toys, mattresses, you name it I've seen it, even a piano was brought out and shot up. On top of that hardly any of them pick up their brass or shotgun hulls so we have that adding to the mess. It makes me sick to think that these subhumans feel that this is acceptable. Who raises these people? The place is going to cost a ton of money to clean up. Not to mention the damage that it does to the environment and the just the danger having all this trash around. I had to walk my dog at heel to the truck for fear that she would cut her feet on some broken glass.

I talked with a county sheriff yesterday about the problem and he said that they are doing what they can. They are patrolling the area more often and that they are giving out tickets for safety issues and littering and dumping. They are also giving out rewards if anyone gives them information that leads to a conviction for dumping. Hopefully this will help. I know I will try and do my part I hope other citizens will to. There's my rant.

The other side of the story yesterday was that Hazel and I had a great hunt. Hazel was great and had a couple great points and gave me great opportunities. Sadly we are down to our last couple of weeks of hunting for the season. Its been a great year and I had a blast.
Labels: Environment Hunting