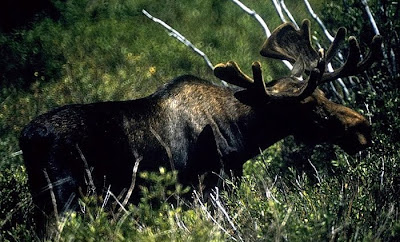 Last night was one of those hunts that I was happy when it was all over. That is a very unusual statement coming from me but it was was how I felt.

I headed up for a late afternoon grouse hunt with just my young setter Chief and myself. It was a beautiful day in the mountains. 60 degrees and sunny with a nice cool breeze coming through the canyon. Everything started out perfect enough. Chief was working well and I was enjoying the walk through the aspens and pines. We were following a game trail used by moose and elk. Easy walking with tons of cover on either side. I remember thinking, "how great is this place?" when everything fell apart.

Chief started to get real animated and acted in a way that I interpreted as "birdie". Chief then stopped hard, I was hoping it was a point but his tail was flagging hard. I had never seen him behave like that before. ? "What you got Chief?", I asked. Chief then took off in a dead sprint that led to a chase of a snowshoe hare up and over the hill and out of site. So far out of site that I could no longer hear his bell. Sh!t!

I've lost dogs in the woods before and it's never fun. I've never lost-lost a dog before but know people who have and it's heartbreaking. I wasn't too nervous but still very concerned and proceeded in pursuit up the hill. After a couple minutes I started calling and whistling. Nothing happened. I whistled louder and then started really calling. I realized that over that hill is a pretty deep drainage and at the bottom of that drainage there's a fairly busy mountain road. I made it up to the top of the hill and I could hear quite a few cars traveling on the afore mentioned road. Thats when I really got concerned. I called and called and was whistling as loud as I could, praying for the sound of Chiefs bell to come back to me. I make it to the top of the hill and I couldn't see any sign of Chief as I was whistling (loudly) I turn to my left and look smack right into the face of an adult cow moose. Holy crap!!!..... Imagine that. If you follow a moose trail it may lead you to a moose. :)

I love moose but they make me very nervous. I've had a couple encounters with these large beasts and let's just say I have a deep respect for these animals. If you've ever had one pin back their ears and come at you with angry intentions you understand where I'm coming from. Moose are pretty prevalent in this particular are that I like to grouse hunt and I run into them 2-3 times a year. I try to keep my distance and be as respectful as possible. I usually feel pretty safe around them but you never know how they will react when you can catch one by surprise.

Slowly I turned and walked away from the moose until I had put some distance between us. All the while trying not to create any eye contact and trying to look as non threatening as I could. This moose was giving me the hard stare all the while. She didn't move a muscle, she just stood her ground. Once I felt like I was a safe distance I end up walking into her friend, Mr. Bull Moose. The Bull was much more nervous and he had started to walk off... slowly. So here I am between a pair of moose and that's the moment when I heard Chief barking for help. So keeping a close eye on both moose I whistled and called for Chief. The bull stopped, the cow still didn't move. Chief is still coming and barking every now and then so I respond until I work him back to me. I get him and I proceed to go back down the hill away from the moose. We get back to the bottom and we take a break. I make sure Chief is OK and watered, I shared a granola bar with him and we proceed to go on with our hunt when... Chief chases another rabbit up and over the hill.................................%$#$&*_!@$^%*

All's well that ends well. I got him back again and we got out before dark and we made it home. I can't really blame Chief. He is a 5 1/2 month old pup and full of it. I haven't been able to get him into many birds so far this year so when he had his chance for some real excitement he took it. We will be introducing Chief to the electronic collar the next few weeks. We will need to do some trash breaking I'm sure. I'm just glad it wasn't a baby moose that got his attention. Things could of got ugly quick. Over all he's doing really good and has worked up a bird or two for me. No hard points and no birds shot over him in the field yet but that will come. Hazel was just spaded so she is out of commission for a couple weeks. I really missed hunting her last weekend. We could of used her. So its just me and the Chief for another weekend. It's good for him though. You ought to see this young dog work a cover. It's impressive. Around the house the best word to describe him is bouncy. He is always happy to see you and makes sure your aware of his excitement. He's a good boy, he just doesn't know yet how to handle all of his energy. Get him on the training table or your lap and he just melts in your hands. He's a sweet little guy. 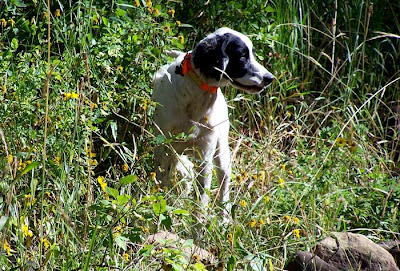