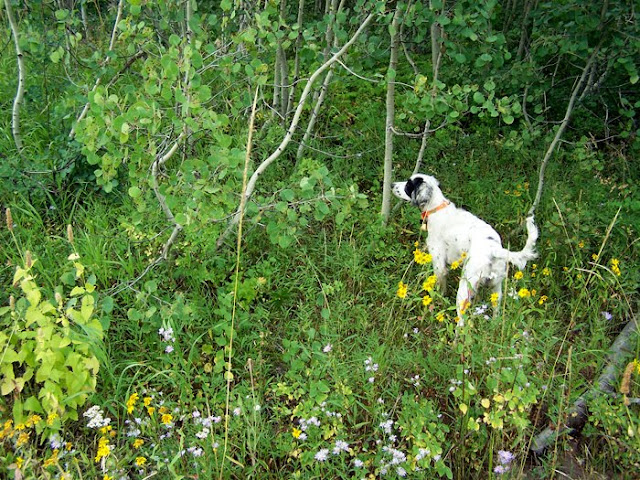 Utah's upland game season opened with the forest grouse (dusky and ruffed) and doves September 1st this year. This is a couple weeks sooner than usual for the grouse. I've been able to get out a couple of times and enjoy some grouse hunting with the dogs. 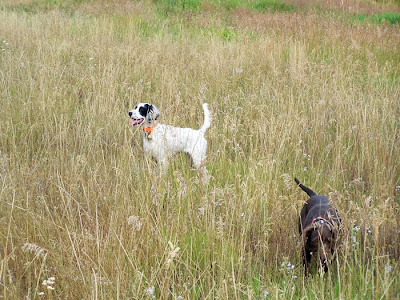 We haven't been able to connect with any grouse but we've had some contacts. The dogs are working hard under very unfavorable conditions. I think we need a hard frost to come through and knock down some of the cover. It's still very green and thick here. On top of that it's been warm. Beautiful though. I have a theory that with all the green growth that it is making scenting conditions very difficult for the dogs. Plus walking through it all is very tiring. But we're having fun. I usually don't get rolling on the grouse until the end of September anyway. Right now it still feels a little early to me for grouse season. My pants are stained green and I was eaten by mosquitos and stung by ants all while sweating profusely. Not the usual fall grouse hunt I'm accustomed to. We will keep working it until we get it figured out. We always do. 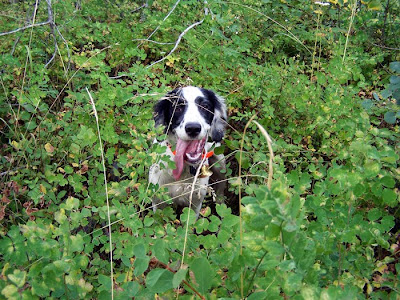 Chief my Llewellin is doing great. He had a great summer of training. He was worked on pigeons in and out of launchers and handled both very well. He's a good little bird finder and has a beautiful point and shows signs that he will be a natural backer. I'm excited to get him on more wild birds. You can tell it's just going to be a matter of contacts with more wild birds and this guy will be awesome. He is really impressive how he works a cover for such a young dog. 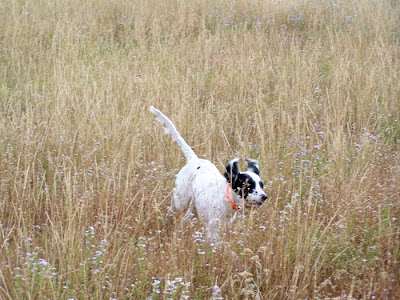 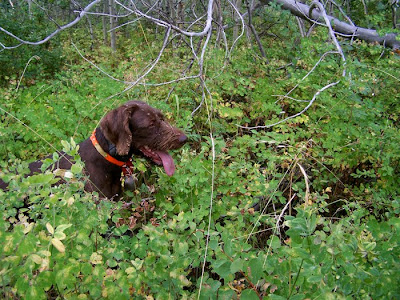 My Pudelpointer Hazel has been working very hard and is doing very well. However, she suffered a pretty bad eye injury along with a nasty scratch on her chest. She will plow through this heavy cover fearlessly and I'm afraid she hurt herself. She's pretty sore today. She will be fine after after a little break. Her poor eye was scratched and along with that she picked up a nasty sticker we have here that become embedded beneath her eyelid. This particular sticker is about an inch long hard needle shaped pest with a barb on one end. They get everywhere. Annoying things. Usually I can get them out of the dogs eyes myself but this time Hazel's eye was so swelled up I couldn't get it there to find it. The Vet was happy to numb up her eye with some drops and was able to remove the intruder. Her eye looks very sore but much better than it did. 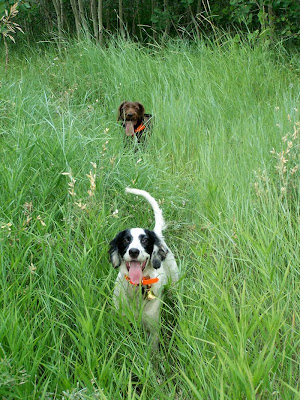 I'm looking forward to some colder weather and more days afield with these dogs. It's going to be a good year with these two.
Labels: Bird Dogs Hunting