CHIEF OF DESTRUCTION AND A SKUNK IN THE GRASS

Since my hunting season ended a couple of weeks ago I've been busy catching up on projects around the house that I've long neglected due to hunting most weekends. Just some general cleanup and maintenance, nothing major. Unfortunately, this has caused me to neglect my bird dogs and they haven't got the exercise and run that they've become accustomed to. I've walked them and taken them for short fun runs a couple of times, even put them on the treadmill a few times but not the full out run that they get while hunting. Well after a few dormant days in the yard Chief decided to remind me that a bored young dog can be one of the most destructive forces of nature.

He had been carrying on all that day. Barking it up, wrestling rougher than normal with Hazel, bouncing off the back door. I even got after him a couple times to be quiet. But, I didn't pay him the attention he was begging for. When I finally went out to spend some time with the dogs it was already getting dark. He greeted me by spitting this red plastic thing (above) at my feet. At first I didn't know what it was, it looked familiar but I couldn't place it. Then it dawned on me and all it took was a glance at my machine to realize that he had found a way to keep himself busy.

He ATE my snowblower.

He had chewed up the plastic ignition key, chewed off the pull string handle, chewed the exit tube that throws the snow up out of the machine and somehow dismantled the engine brake mechanism. Little bugger. I could of thrashed him.

Chief didn't run away. He just lowered his head in shame and just looked at me with a sad hound dog look. I realized that this mess could of been prevented with a simple 10 minute game of fetch or a quick 20 minute romp at the park. These dogs (birddogs, gundogs) have to be stimulated both physically and mentally daily. You (I) can't just leave them to their own discretion for very long or this is what happens. Anyone who gets one of these animals needs to know the full commitment that is involved. Chief gave me a nice reminder. Sorry Dogs. Luckily we haven't had any deep snow here in the valley so I haven't had to use the snowblower yet. Ordered the new key and other than some cosmetic damage it should still run fine.

Lesson learned I took the dogs out to a local WMA area the following week and let them tear it up. We got up 5 pheasants and a couple ducks off the river. It was a very windy day but the dogs didn't care. They were winding roosters from a long distance and I was able to see some beautiful long distance points. Towards the end of our romp we were working a large ditch and both dogs were very birdy. Chief got up a couple birds but I was below it all and didn't see what had occurred. I ran up to the top of the ditch bank and Chief was out of sight. He must of chased after the pheasants that flew. Hazel then starts working this side of the slough. She go's on point. I finally had the foresight to get my camera out of my backpack and snapped the picture below. Hazel then stops and looks at me with a "what do I do now" look. Not thinking or noticing her change in demeanor  I walked up and squatted down to get a better photo when I see the grass to my left move. I thought to myself "awesome, there's the bird" but I quickly realized that instead of feathers I was looking at black fur and we had a skunk. I called Hazel off it and we got the heck out of there. It was just a little skunk but I'm sure it could of made the rest of the afternoon miserable for us all. 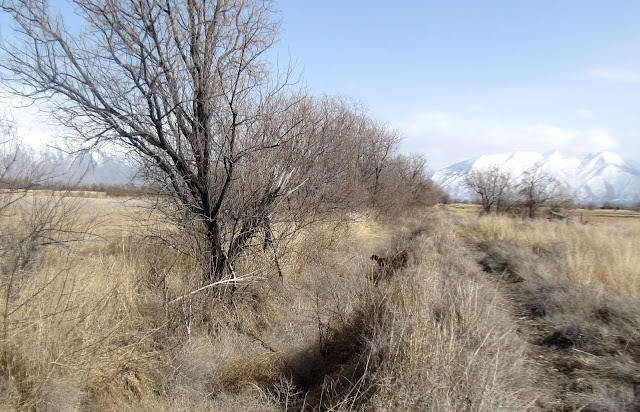 Hazel's been sprayed before and I'm glad it was her rather than chief that found the skunk. I'm not sure if I would of been able to call him off. All is well that ends well and both dogs came home tired and we had a very peaceful rest of the weekend.

Skunk Spray Remover Solution in case you ever need it. 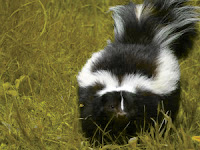 Mix all the contents together in the bucket until its a thin soapy paste and liberally "frost" the dog with the solution in the contaminated areas. Be careful not to get it in the dog's eyes. Let it sit for about 5-10 minutes and rinse and repeat until the offending odor is diminished. Then give the dog a regular bath with shampoo to rinse the solution completely away.


I  try to keep it all in a bucket in my truck. I've only had to use it once but I was so happy I had it.

The time I used it Hazel was dowsed by the biggest skunk I've ever seen. It looked like a giant walking floor mat until it raised it's tail.  I think that big skunk had been storing it's spray up for a while and gave Hazel both barrels to the chest. My dog was soaked in enough skunk funk to gag a sewer rat. She literally looked like someone had thrown a bucket of skunk at her chest, she was soaked with it. We were only a couple blocks from home so I threw her in the open bed of my truck and went to my house. I tied her up to an apple tree in the yard and went to work with the above mentioned solution. Meanwhile the whole neighborhood was wondering if a skunk was stuck in their window well. It took 4 dowsing of the solution and a bath with the most perfumed shampoo we had in the house before I could stand to be near her. She slept outside for a couple days and she still had a very faint skunk odor for a about a week after the incident. Skunk juice is powerful stuff.
Labels: Bird Dogs