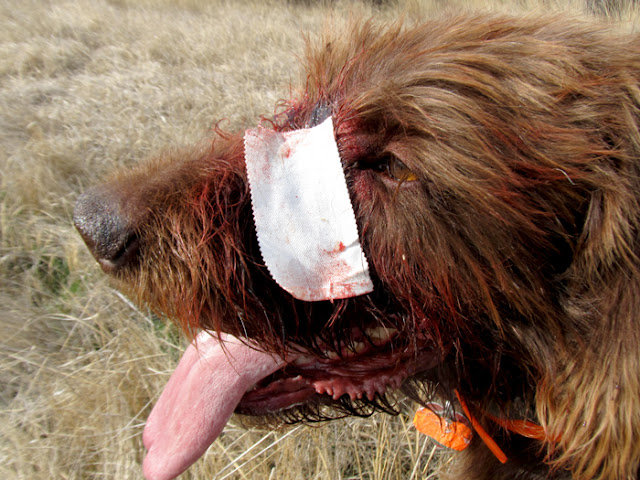 We had a scary moment this past weekend. We wanted to run the dogs one last time on wild pheasants before the nesting season begins. We were having a wonderful time and was getting into a mess of birds. All the dogs were doing great. My brothers shorthair was working a bird along a fence line and appeared to have the bird slammed. As pheasants will always do this bird was running and the dog was starting to fizzle out on the scent. I thought no way that bird ran out too far a head of us with my dogs running big ahead of us. I called my dogs in to help find it. Hazel my pudelpointer and Chief my setter followed the scent onto the other side of this 4 strand barb wire fence. I believe Chief flash pointed for a second and the bird came up just a few yards from us. The bird flew over this fence and all three dogs followed in hot pursuit, right through that barb wire fence.

All 3 dogs came up injured but Hazel was by far the worst of the 3. The grass in the area is about 3 feet tall so I don't think any of the dogs realized that the fence was even there until they hit it. Chief has a 1 inch slice on his chest and sliced up his tongue a little. My brothers shorhair Sage sliced one of her back feet open and Hazel punctured herself right below her left eye.

As soon as it happened I knew we were in trouble. Hazel's face was instantly pouring blood and by the time I got a hold of her it was dripping down her beard and flowing pretty good. I grabbed her and put pressure on the spot that appeared to be bleeding but the bleeding didn't seem to be slowing down. My brother dug open my first aid kit and pulled out my largest bandage, a large belly bandage, and opened it for me. I slapped it on her face and held it tight as I could but it became completely soaked in about 20 seconds. That's when I really started to get concerned that I wasn't going to be able to get this wound to stop bleeding. My brother then offered his tube of EMT GEL and I gratefully took it. My own tube had dried out and I recently tossed it and I haven't replaced it yet. I took a nice marble sized glop and placed it over the wound. It slowed for a second but eventually the blood popped the gel like a blister. I applied the EMT gel a second time and the bleeding stopped. Halelujah. I stuck a piece of first aid tape over the wound, leashed her up and headed for home. 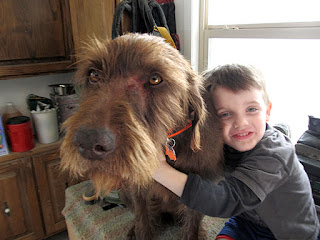 At home I gingerly removed the tape and cleaned up her face and washed the area with hydrogen peroxide. I shaved of the gel and hair around the wound and exposed a single puncture wound just an inch in front of her eye. I thought it was going to be much worse for how much it bled. She must of hit a large vein or something. Once it was cleaned off It oozed a little more blood but not much and I called my vet. It was the weekend so he wasn't working but his assistant was very helpful and told me what to look for. It appeared to be a pretty strait forward wound and she recommend some antibiotics which I had on hand so I didn't even end up taking her in. Today (2-days later) she looks great. No swelling, the bruising is almost gone and her eye looks clear and bright. We dodged a bullet on this one. Hazel is lucky she still has an eye. 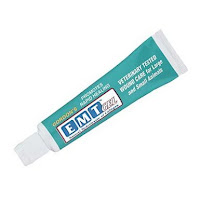 The other dogs are fine and basically got the same treatment. Cleaned their wounds with water and peroxide and sealed them with EMT gel and they are both healing up nicely. Thank God we came out of that unscathed as we did.

If you have bird dogs, dogs or even horses. BUY EMT GEL and always have it on hand when your out and about. Accidents can happen anywhere and this stuff can save your pets life. We have used it now for the past 3 years and this is the second time that it has saved the day. It's great for all the little wounds that we encounter with our dogs. I can't say enough about this product.