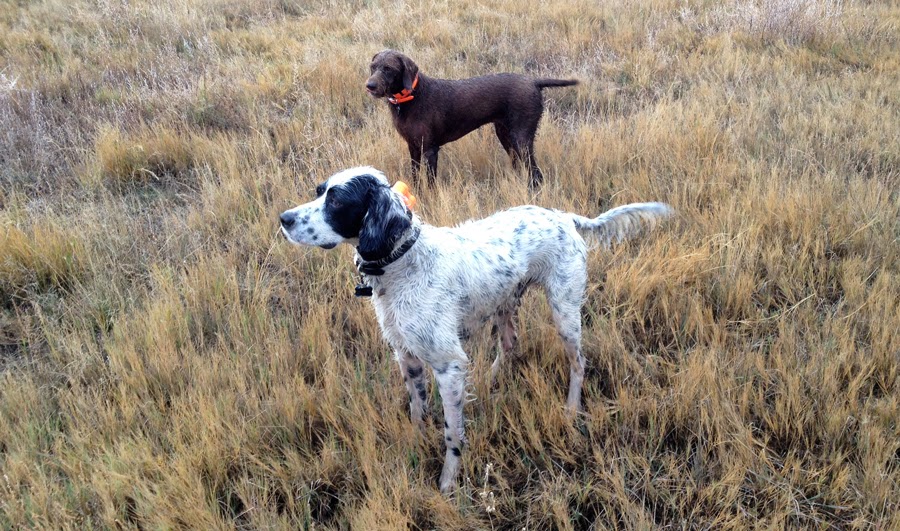 For the first time in a decade I was unable to get out for the opening day of the Utah Pheasant hunt. I had been struggling with a virus that laid me up for a few days last week and Saturday morning I was still having issues. Sunday morning I couldn't contain myself and I was going hunting. Sickness be damned, I was going. I woke up to a perpetual downpour but was not going to be daunted. I grabbed my jacket, put on my upland chaps, grabbed a beater shotgun and went for it.

We arrived to our destination and the rain had subsided for the moment. I got myself ready and put the collars on the dogs and out we went. The first area we went into both dogs were excited but both were in control and hunting well. Within 5 minutes Hazel, my Pudelpointer, was on point. As I approached I could see the bird hiding in a thicket. It was a rooster and he was soaked and did not want to fly. Hazel held the bird well but eventually the bird bolted and I was able to drop it with my first shot. When Hazel brought it to hand it was obvious that this was a Utah DWR planter bird. Thin feathers and the tell-tell soft area on the beak where they keep blinders on them proved it. Oh well, it was a bird in the bag. The dogs were stoked.

That was pretty much the highlight of the day. It rained  all morning. Hazel had 2 more nice points on pheasants. One was in the tall fragmites. I had lost her for a few minutes and that's very unlike Hazel. I knew she was somewhere pointing a bird.  As I looked for her she held point until the rooster flushed. It was a nice fat bird with a long tail. Not a planter. It was at the edge of my range for a shot and if I wounded it, it would of been a tough  long,  retrieve in the fragmites so I didn't fire. I was glad to see how long Hazel held that bird. The other pheasant she pointed was a hen.

Hazel also pointed a small covey of california quail. When the first bird went up I was surprised, I was expecting a pheasant and had never seen quail in this area. By the time I got my wits back the rest of the covey was going up and was gone. I never got a shot. We tried to relocate them but they had flushed onto some private property that I couldn't access. It was a good day for Hazel.

Chief my Llewellin had 2 points on hens and one on a mean-eyed feral cat. The relationship quickly went south and got ugly. Hazel wanted some of the action but I called them both off the poor thing. It's been a while since they had been in a cat fight and both dogs were fired up afterwards. It was actually pretty funny and no one got hurt.

After about 4 hours of slogging around in the rain I felt like we had had a good time and the dog work was good for the situation so I headed for home. Overall it was enjoyable. We saw 6 pheasants, 2 roosters (1 planter) and 4 hens plus a small covey of California Quail. Pretty productive in my opinion.

Even though we had a good time, I really wish the state would spend more money on securing more habitat or find ways to improve the pheasant and quail habitat we have rather than dump truck a bunch of pen raised birds into the wma's the day before the hunt every year. It's fun to shoot birds but I would rather shoot less and have more opportunities on wild birds. That is why I hunt. There is nothing cooler than bagging and old, wiley rooster. They are a prize. A little predator control and habitat management could go a long way. There are still a lot of rural areas in this state that could be awesome. Utah once had some good pheasant hunting.

A $10 upland stamp or a pheasant stamp could pay for a lot of habitat improvement. The state could buy some Surrogators® from Wildlife Management Technologies and build some healthy populations. Or use the money to buy some access to land or better yet acquire land and lease it back to farmers and give them strict guidelines on how to plant, leave shelter and food for wildlife and allow good ethical hunters access. I know most hunters would have no problem paying for it and once we got results the state could keep the program going to acquire more land and habitat. I would gladly pay much more for my license if the hunting was better and I'm sure others would too if given the opportunity. There's got to be a better way. It's just one hunters opinion and I'm full of ideas and (other stuff) I'm sure it's more difficult than I could imagine. I would love to see the DWR get more aggressive and think more outside the box. I'm personally not impressed with the Grand Slam Program and will be surprised if it's a success. There's my rant. Pheasant stamp yo!
Labels: Bird Dogs Hunting Pheasants