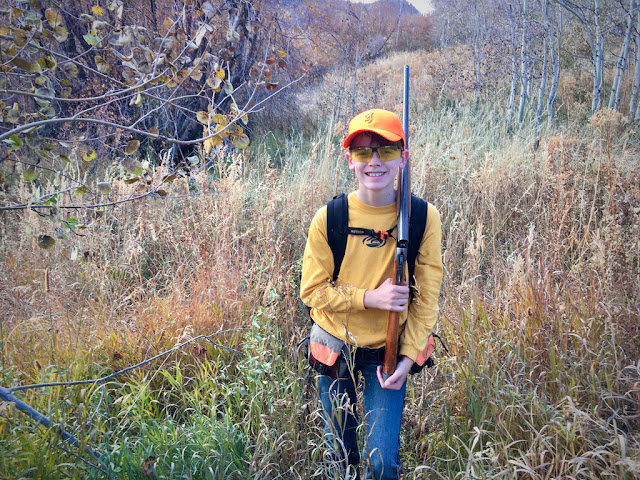 This past week, my Son and I escaped from work and school one day to pursue some grouse. Jack was happy to get out of school early and I was happy to abandon my desk to get out into the woods for a few hours.

We weren't as successful as I would have liked. The area we hunted only produced a single flush of a Ruffed Grouse that neither of us were able to get a shot at.

However, it was an enjoyable walk and it was nice to spend some time together out in the autumn colored Wasatch mountains. The cover was thick and Jack did great. He's getting big and marched through it like a man. He did complain that I need to get him some gloves. He didn't like pushing the sticks, stickers and, thistles out of his way with his bare hands. Some brush pants may be helpful as well.

After a couple hours we decided it was time to head back to the truck. On the way back, we were walking through an open grassy area when we witnessed a beautiful, young bull moose charge through the area ahead of us to get itself to a watering hole. He was in a hurry for whatever reason and was in a full trot about 100 yards ahead of us. We just stopped and watched and I don't think the bull was even aware that we were there until he caught a glimpse of our dog Chief working the tall grass around us. He stared at us for a several minutes and eventually slowly moved off our line. I was grateful because if he didn't move, the way around was going to be a tough little hike back to the truck.

It was super cool to see and It helped reaffirm what I always say. You may not always be successful at getting whatever you are hunting but you will almost always witness something cool that makes the trip all worthwhile.