My brother and I were able to escape from work for a few hours last Friday. With the cooler weather I thought that it may be wise to focus on habitat that holds Ruffed grouse rather than chase Duskys. It ended up being a good plan. In two hours we moved 9 birds and was able to knock down 2 of them.

Ruffed Grouse have become one of my favorite game birds. There is something special about them. Next to Valley or Gambels quail, they are in my opinion, one of the coolest looking native bird species we have. There's a lot to look at on a ruff. From their crown to their tail feathers they are filled with the most amazing patchwork of textures and patterns. When I'm lucky enough to bag one, I can just sit and roll it in my hands and revel in each section of the bird.

Secondly, they are so squirrelly. Their unpredictable nature make them a lot of fun to hunt. You don't know how each one will react. Sometimes the fly directly up into a tree or they juke and jive through a stand of young aspens in such a way that leaves you awestruck how they were able to cut through it without disturbing a single twig. Or how their small reptillian brain helps them know just the right time or place to flush so a hunter doesn't get a clean shot on them. They have a lot going for them. I grew up reading Burton Spiller, George Bird Evans and the like, so ruffs have a mystique about them that I've gained from those stories.

I have a few dependable grouse spots and I usually hit those same covers year after year and have educated a few birds on what we bring when we enter the woods. I find these birds fascinating and wish I was better at chasing them.

We started the day in a heavy aspen stand that quickly turned into more open country with buckbrush and berry bushes and open parks of grass. Once we crossed that area, we arrive into an area that is mixed with young aspen stands bordered by oak brush. That's the habitat I look for when I'm after the ruffs. This particular area also has a lot of water, so you get little pockets of swampy habitat that these birds seem to love. It has proved to be a fertile area that I try to hit at least a couple times a year.

The first bird of the day was found by Chief. I got a signal that he was on point from my Dogtra Pathfinder but within a few seconds I could hear him barking it up. He has a tendency to bark if he's sees a bird flushes up into a tree. It's a learned behavior from my Pudelpointer that gives voice on treed squirrels, game birds, house cats, or whatever. Chief does it too and it's proven to be effective at times.

So the bird must of went into a tree just out of his reach and the time I got there, the bird had either flown or I couldn't see it.

A few minutes later the same scenario repeated itself. This time however when I approached, I could see the bird about 12 feet off the ground in an aspen tree. When I got closer the bird flushed straight away and I was able to knock it down with a single shot.

A few minutes later Shawn and I were working a hillside with a stream running around the bottom end of it. Shawn went high and I wrapped around the southern downward side. I saw a silhouette of a grouse gliding over the top and land in a patch of oakbrush. I started heading that way when 2 more flew over the top of the hill and were gliding to another patch of cover. I took a shot at one of those birds but missed as it soared behind a tall oak tree. I heard Shawn shoot above me and 3 more squirted out. One landed precariously on a steep bank and tumbled down into the thick foliage next to a small stream. I headed towards that bird but it flushed before I got within range.  I met up with Shawn and admired the bird he had killed and took the photo above. I was happy to hear that Chief had retrieved it for him. It was an exciting sequence of events.

A few minutes later Chief had worked his way up to an adjoining ridge and we heard a bird flush wild in front of him. Moments later we saw Chief bump a big blue grouse out of a patch of grass in that area.  I wasn't very happy about that but it may have just been a bad angle for him and with the excitement of the ruffs flushing wild a head of him I decided I couldn't be too upset.

That was most of the excitement for the day. We split up and I ran into a few turkeys which reminded me I need to get a fall turkey tag. Near dusk Chief pointed a single blue in a maple stand but the way it flushed it didn't give me much of a chance. I took a hurried shot that was far behind the bird.

The last thing that happened, which I found pretty funny, was at the end of the hunt as I was hiking back up to the truck. The trail I climbed crossed the road near the spot we had parked. I was about a hundred yards from the truck and dusk was settling in so I opened my shotgun and unloaded. The moment after I pulled the shells from my side x side I took a step onto the dusty mountain road when I notice a ruffed grouse, not 10 feet from my right, I had interrupted it while it was taking a dust bath. We both stood staring at each other, wondering what to do next. I carefully slipped my shells back into my chambers but as soon as I moved to close my shotgun the bird whirred down the road and disappeared silently into the dim light of the forest at dusk. That was pretty cool. 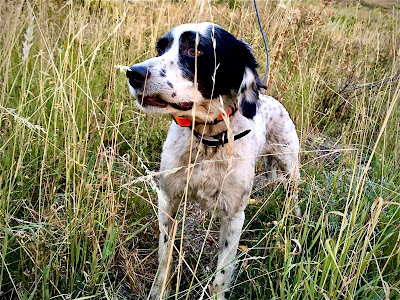