We've had a great start to the upland hunting season chasing blue (dusky) grouse. We've been out a few times and have been able to get into enough birds to keep things interesting. It's been a long hot summer so it's nice to get out with the dogs and let them do what they were born to do and occasionally reward them by shooting the birds they find.

On the opener I decided I was just going to take out my young pudelpointer Scout. She's just over a year old and is growing into a really fun dog. She's got a great personality but she's a lot different than my older pudelpointer Hazel. She's sweet and loves to play and she's vocal like Hazel but she isn't as eager to please and is less obedient than Hazel was at this age. She's not bad, it's just that she has her own agenda and seems annoyed when I put down rules or go into our yard training sessions. Hazel was the opposite. I'd pull out the training table or the place mats and Hazel was spinning 360's with excitement. Scout gets this look of "oh shit... that's what you want to do." So I have to keep training sessions short, like really short, to keep her interest and to feel like I'm making progress. But slowly she's getting the drills down and becoming more obedient and is starting to act like I'm the boss. LOL. She's super smart and she will look for any way to get out an exercise she doesn't want to do. Which is all of them. She's a challenge when it comes to the obedience type of work. 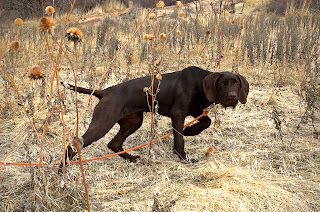 In the field, she's awesome. She works hard and has a great motor. She loves finding birds and has a very strong and intense pointing instinct. She has a great nose and during training I've paced off several of  her points where she's pointed her birds at 30+ yards out from where the bird was planted. During the season thus far she's had several points on wild birds so I'm very happy with what she's showing me. Last year she showed promise. After hunting season was over she pointed a few wild quail and a few pheasants. She was only 7 weeks old this time last year so the only real hunting she got to participate in was tagging along on a couple pheasant hunts and  by late Chukar season she was hunting with the other dogs but never really put it all together. She did gang point/back a couple birds so I knew it was going to come.

Her retrieving in the field is almost non-existant at this point. I've been pretty disappointed in this aspect but it will come. It took years for my Setter to become a solid retriever so I think Scout will be fine, I just have to be a little more patient than I would like. This really surprised me because every other Pudelpointer I've seen have all been strong retrievers. Hazel was a natural from the get go. In the yard, Scout will do 3 maybe 4 drills and loose all interest. She's been that way since she was a small pup. I've tried everything from canvas bumpers, dokken bumpers, dead pigeons, to wings strapped to bumpers and I always get the same results. After a few retrieves, she just fizzles out. So far in the field she hunts dead and has found a few downed birds and will point dead and eventually break down and just kind of stand over the bird. Once, she picked up the grouse and actually came towards me. I was stoked but she dropped it after a few steps and just stood over it spitting out the feathers. She's interested but everything hasn't clicked yet. I'm not overly concerned yet. I think she will get it eventually and it's just a matter of time and work.

This year I want to give her plenty of opportunity and have a lot of one-on-one time with me in the field.  You can watch her confidence grow with each outing.

On the opener things started kind of slow but picked up as the day went on. We eventually found birds on the edges of small clearings inside of medium sized aspens, usually within a stones throw of some water source.

The first group of grouse we came across was a family group that was camped out on a small hill right next to a stream. My brother Shawn's dog Oakly pointed them and Scout came in on the point but backed once she saw Oakley was on point. No birds came up but they had moved just ahead of us up the hill so the moment the dogs broke down they flushed about 25 yards above us. Shawn was able to knock down two of those birds and I took a hurried shot of a high riser that I missed. 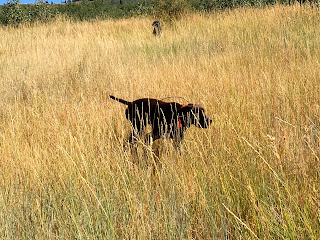 The second covey of blues we came across was next to some willows in a swampy patch of ground. It was a large family group of about 8 birds that all came up right at my feet. They totally surprised me a I shot twice behind on the bird I picked out.  They didn't fly too far so I went after a few that flew down to another clearing just below us. As we worked through the clearing a young bird flushed wild ahead of us, As we got closer to that spot Scout went on point and two birds came up a few seconds later just ahead of where she was pointing. This time, I had my composure and was able to make a nice double on the two young birds. Scout picked up one of them and just stood there with it and tried to move from me as I approached her. But I was able to get a hold of her before she got away and pretty easily released the bird once I got a hold of it. The second downed bird she pointed dead and I walked up and scooped it up. Not a bad start. 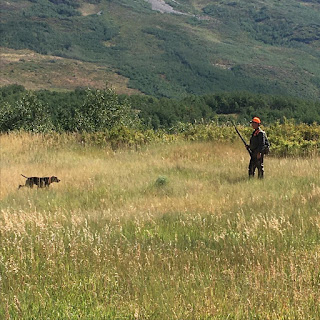 That was probably about 10 am in the morning and the sun was out and it was getting hot fast. We decided to call it a day and head back to the truck. On our way back to the truck Scout and I separated from Shawn and his dog and took a line that took me up a gradual slope, through a large open area that was filled with knee high grass that was scattered throughout with some old sagebrush. As we were going up through that area I saw Scout getting birdy. As I watched her get more animated over whatever she was smelling a single grouse popped up about 20 yards or so in front of her. Since she didn't bust it and it was a wild flush I decided to take it. It flew almost directly at me, I let it passed and dropped it. Scout ran down the hill and pointed dead again. I walked down and picked up the bird and she ripped it out of my hand but gave it right back. She was fired up. We headed back up to where that bird flushed and scout immediately go's on point.  As I approached the bird, it flushed and the same scenario as before presented itself and I shot that bird after it had passed me. That was a limit of duskys and I was stoked. Scout had a great day and I had a shooting streak of 4 shells/4 birds going. 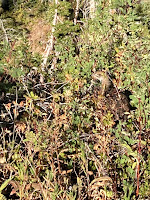 I wen't out the next day with my entire pack of Scout, Chief and Hazel and it was just too hot for the dogs to work productively. We hiked right along a stream so the dogs could keep cool but it was evident that 90 degrees was just too much to ask from them. Especially Hazel who is nearly 13 years old. I was planning on a short hunt so I thought she could handle it but I have to admit that she's too old for those conditions and called it a day a little earlier than I normally would have. We did however get a single bird out of the day. It busted wild ahead and above us and I was able to knock it down as it flew past us. Hazel and Scout ran past where it landed so I went to pick it up. This bird was not completely dead when I found it and it had burrowed itself deep within some dead grass and I had to root it out. Luckily a few tail feathers were sticking out to show me where the bird was hidden.

Since those first couple days I've been out a few more times. It's been a blast watching Scout become a bird dog, it's crazy how much she's seemed to grow-up the past couple of weeks now that she has a job and a purpose other than the training sessions. So far I'm super pleased. If the retrieving was rolling better I'd be over the moon over this dog. That will come though. I'm sure of it. Just work and some patience she'll get it. If I have to I'll send her to a pro trainer in the off-season to clean this one thing up but I don't think we will need to. Time will tell.

My favorite hunt thus far was this past Saturday. We did an evening hunt and got up on the mountain to our spot around 5:30. It was me with Scout and Chief, my brother with his dog Oakley, and his oldest son Michael. We hit the cover and immediately Shawn knocked down a nice big bird that tried to escape us. We hunted hard but didn't see anything for the next couple of hours. We hit a large open area where we've had some luck in the past, we've caught coveys gorging on grasshoppers as the temperatures cool in the evening hours.  The light was so beautiful as we walked through the knee high grass, we watched our bird dogs working the area into the wind, high heads rolling back and forth in front of us. All during that golden hour before the sun drops below the horizon. Aesthetically, it was gorgeous. If there's a heaven for a bird hunter like me that would be it. I regret that I didn't take a single photo. I think I was just too caught up in it all. Chief however capitalized on the moment and found a single bird in this area. He stuck a gorgeous point on a bird that Shawn was able to bring down. Soon after Chief repeated this and found another single for me as Scout backed his play. The bird presented a low crossing shot that I paused on until it banked away from my dogs, once it safely cleared them, I raised my cz bobwhite for a quick shot that dropped the bird . It was perfect way to end the day.