It’s become more of the norm that my weekend hunts to be accomplished in the evening time. With my son’s soccer schedule and other obligations it seems like my weekend mornings are usually filled up. My opportunities are limited to the late afternoon to sunset hours of the day. I generally don’t mind, I generally enjoy sleeping in and it gives me an opportunity to catch up on other projects and such, so it all works out.

Last Saturday, I got out to a spot I’ve had my eye on around 3 pm in the afternoon. It was pretty warm and the cover was a combination of pines filled with a ton of deadfall bordered with young growth aspen that was almost too thick to walk through. The temps were in the low 70’s. The dogs came out of their boxes with their hair on fire and did more sprinting than hunting for the first 20 minutes or so. Both were charging around at hyper-speed, climbing over logs and deadfall and charging through those young aspen stands. It didn’t take very long before they were both at my feet, panting and begging for water. After they caught their breath and actually started hunting, the only game we saw was a nice mule deer buck that we bumped off his bed. I decided to move to another hopefully more productive spot.

On my way to the second spot, I stopped by a small beaver pond and let the dogs go for a swim. That regenerized them and they both were very active and focused from that point on. Almost immediately, after we hit this new cover, I see Chief getting birdy. His tail was sweeping back and forth like a windshield wiper as he worked out the fresh bird scent. He flash pointed for a second then disappeared over a small rise and vanished into a fold in the terrain. I jetted over to where I last saw him, all the while, my phone in my pocket that is attached to his Dogtra Pathfinder collar is buzzing to signal me that Chief is on point. When I get over the rise, Chief was directly below me, locked up, with his sickle tail up above his head. It was beautiful point into a patch of snowberry bushes. I scrambled up onto a large flat rock that created a perfect shooting platform. 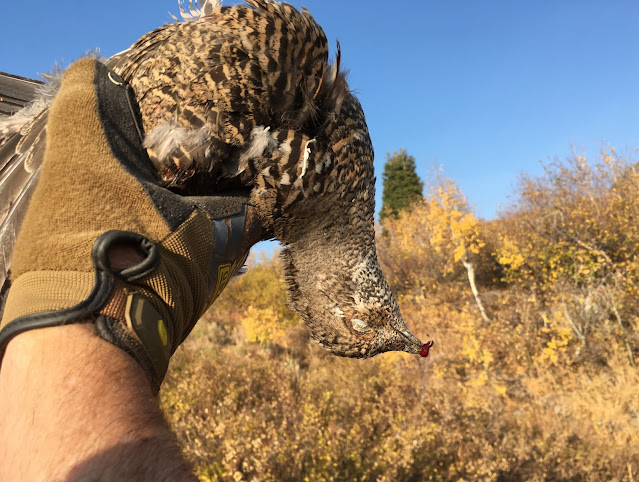 Scout was about 50 yards to my right and I called her over. She bounced over to me, ignorant to what was happening. As she approached she saw Chief and locked up into a nice backing point. It was probably the most enjoyable dog work of the year thus far. I sat there for about 20 seconds admiring it. Finally, it dawns on me to get a photo of this scene, as I reach for my phone, up erupts a single blue grouse.  The bird presented a pretty easy straight away shot that was slightly below me on my shooting perch.  I was able to drop it with a single shot. I should have taken a photo of the point, I never think of that while I’m hunting, especially when I’m alone. I’m focused on being ready for the shot. I call “Dead Bird!” and both dogs scramble over to it and Scout picks it up and just stands there with it. Chief gives me a disappointed look that seemed to say “Look at stupid… she doesn’t even know what to do with it”. I tried calling her to me and she took a few steps and spit the bird out. Scout stood over the bird until I picked it up. “Good Dogs!” I praised them up and watered them and Chief was off to find more. Scout hung around, basking in the moment, fascinated with the dead bird in my hand. 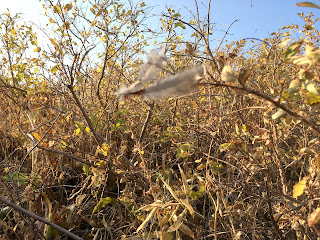 We made a large fruitless loop and didn’t get into anymore action until we were on our way back to the truck. We were working an area where a small stream was trickling down a small sloping hillside. As we approach a bird flushed wild a long ways out in front of Chief. He approached the area where the bird flushed and pointed for about 30 seconds but quickly broke down when he realized the bird was gone.

Scout found the next bird. I decided to backtrack to the area I saw the bird fly to. Once there, I see Scout’s intensity level rise and she started working with more intent until she slid into a pretty little point. As I approached she moved and I whoaed her back into a point. I pushed through the area she was pointing but no bird showed itself. I released her and she repeated the same thing. She pointed again and then moved once she lost scent. I didn’t whoa her this time, deciding to let her figure it out and see where the chips fall. Again, it was unproductive. I look up above us and see Chief slide into a point about 30 yards away. This bird is moving. I approach him and put myself in between the two dogs. Chief breaks down and starts working again. He and scout both go on point and finally the bird gives up and flushes pretty far above us and not near to where the dogs were pointing. It was a high shot that came straight above me so I paused and let the bird pass over before I shot. Once the bird was past me and dropping down hill from us I raised my 20 gauge sxs for a quick shot that hit the bird. BTW I love this CZ bobwhite G2 that I'm packing this year. It’s a killer.

The bird fluttered to the ground and Scout was quickly on it. She picked it up and almost immediately spit it out. I’ll get a full retrieve before this season is over… I hope. It was beautiful mature female bird and will make a fine meal.

We headed back to the truck and  had a little action as both dogs tracked a pair of birds for several minutes. Scout initially started the track but Chief came in above her and got on the same birds, cutting her off. He moved right up on them and held them on point. But the birds were a little further away than we anticipated. The birds eventually broke at the edge of shotgun range at the top of a steep hill. I decided not to take the shot, 1) they were far out and 2) it was getting late and I was worried we were past legal shooting hours. We got back to the truck just as the moon was rising over the mountain. It lit up the valley we had just hunted in a beautiful soft blue light. The dogs and I sat on the tailgate and shared a protein bar and watched a bull elk follow his harem of cows through that same valley below us and disappear into the aspens. It was a peaceful serene moment, I’m so blessed to have these experiences. Blue grouse aren’t the most challenging birds, but the country they live in makes it so worthwhile. I love this time of year.