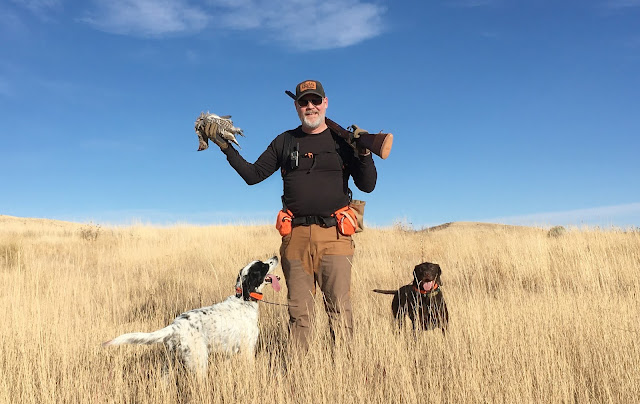 A couple years ago, I was laid-off from my job and found myself in the job market. During that time a company from Idaho Falls reached out to me to see if I’d be interested in taking a position with them, this meant moving the family and our home to Southeastern Idaho. I initially didn’t want to consider it. I have a beautiful home and my kids were in their influential teen and pre-teen years and kicking butt with their lives. I didn’t want to disrupt that. However, as time passed and negotiations continued I decided I better get serious and consider that offer. It was at the time, the best offer I had received and who was I to turn my nose up at it. Personally, the idea of moving to Idaho was intriguing. The bird hunting was better than what I have In this area of Utah, the South-fork area of the Snake River is beautiful. But knowing how my wife and kids felt about the move, it felt selfish.

The negotiations and interviews continued for a couple months and I was eventually presented a solid offer that I felt I should take. My wife supported the decision, although she was very sad about leaving Utah, she conceded that this was what we needed to do. The kids were upset and nervous about the prospect of losing friends, changing schools and starting a new life away from everything they knew.

I got a small bachelor apartment in Idaho Falls, with the plan to start looking for a new home to move the family into after the school year was over. Professionally, it was a good job but required more travel than I preferred. The salary was good plus my coworkers were a great talented bunch. We would start our new life. 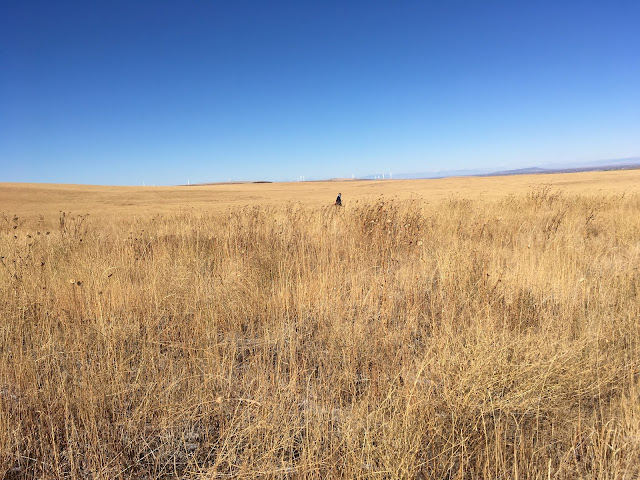 After working In Idaho Falls for only 3-weeks I received a call from a previous employer whom I’d been doing free-lance work for. They offered me a full-time job. It was for more money, I could work from home, and most important to my wife and kids... it was in Utah. My family was so happy, they cried on the phone as I shared the news. I told my Idaho employer that I’d be leaving. It was awkward but I think they understood.

Now after all that life-drama, internally, I was a little disappointed that my new upland hunting upgrade never happened. I was most excited about the prospect of hunting Huns and Sharp-tailed grouse. There’s a very good Ruffed grouse and Dusky grouse population in that area as well. I had done some research and was looking forward to figuring the place out and finding some new hunting grounds to explore and enjoy. That was two years ago.

So I had that itch that I never scratched and I had to get that out of my system. A couple weeks ago I decided to take a road trip to Idaho to chase huns and Sharp-tails.  I’ve hunted Huns before but I’ve never had the opportunity to hunt Sharp-tailed grouse. Sharp-tails were the goal of this trip.

I did some research and found a couple areas of WMA that reported decent bird numbers. I had 3 days to figure it out so I spent the first day just sussing the place out. It was a very windy day, 30 mph winds with gusts in the 40’s. I saw the area that I felt like had the best cover and I liked how open and beautiful the country was. I put a game plan together and the next morning my son Jack and I hit it hard. 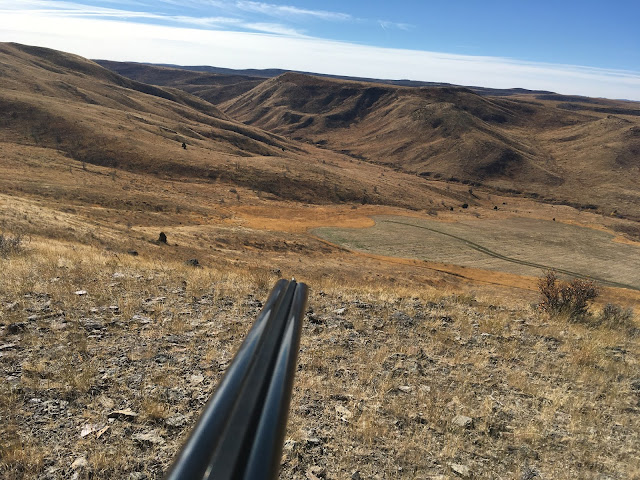 We hiked and walked and walked and hiked but the only action the first day was covey of Huns that flushed out of gun range. We left that spot and ran up to another area to looked around. Right at dusk, Chief put up a fatty rooster pheasant that I didn’t shoot because sadly it was after shooting hours.

The next day we tried a little different tactic, We went to more hilly country that was closer to water sources. We hiked for about 4 hours but still nothing. I was starting to feel a little lost and frustrated but I wasn’t going to quit. 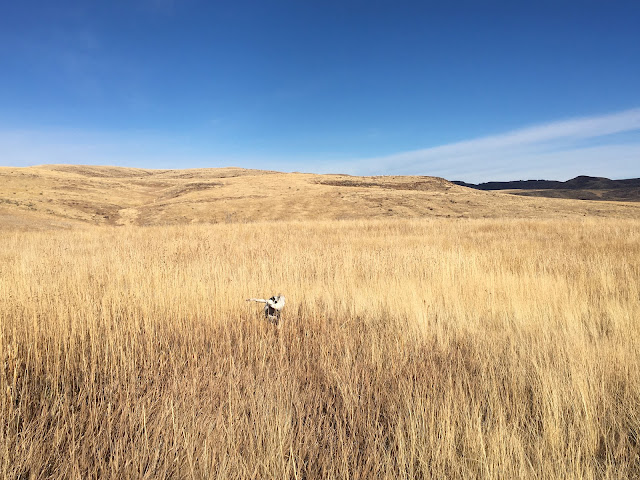 I drove again to a new area and using the onX hunt app I found a spot I felt, might work. I left the truck, Jack said he wanted a nap, so I told him, "Give me about an hour and I’ll call you on the radio". I hiked to the area I wanted to go and found my first set of sign... fresh grouse poop. I can’t tell you how happy that pile of turds made me. I was approaching a steep small butte with what I would describe as a plum thicket, growing on the East facing slope. As I approached the butte, Scout bumps up a dozen Huns. They erupt about 60 yards in front of us and fly over and land in that plum thicket. "OK, this is a good thing". As I approached the area the birds had flushed from I see Chief getting intensely birdy. I’m assumed he was smelling the remnants of that Hun covey. He locks onto a point and immediately 2 Sharp-tails flush and fly up over the hill. (In reflection, I should have shot but I was unprepared for that flush. It would have been a long shot, but It was possible.) I watched the birds fly and flutter down to land on top of the hill I was approaching. 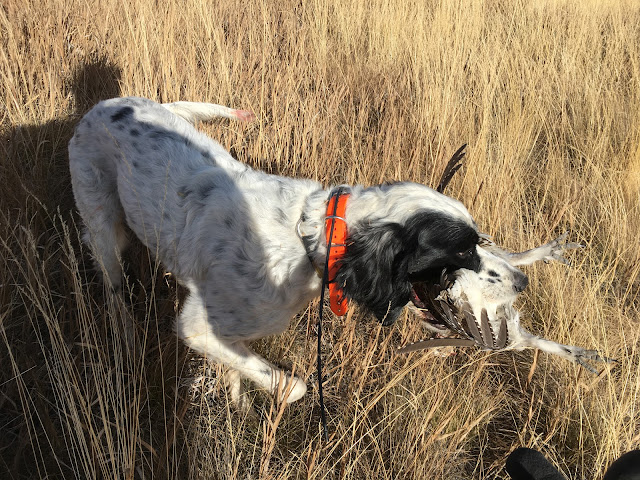 I put a game plan together. I decided to wrap around the backside of this hill and approach from behind the spot they landed. Hopefully, we'd catch those Sharp-tails un-aware. If that didn’t work I’d slip down and go after the Huns in the plum thicket. I hurried around the hill and climbed to the top. This hilltop has a large flat area. I let the dogs work. That’s one thing I love about this area, it’s wide open.  Similar to Chukar country, the dogs can really stretch out and get after it. Chief was totally in his element. Making wide, big casts and doing his thing without any retribution from me for being too far out of range.

We searched this hilltop to no avail. The birds seemed to have given us the slip. I worked back down to the area I saw the Huns with hopes they were still nearby. We worked the thicket but nothing. The dogs were both very birdy but couldn’t zero in on any birds. We worked the length of the thicket and nothing happened until the very edge. Chief locked up on point. I hustled towards him but before I was within gun range I saw 2 Sharp-tails come up right in front of him. I thought, those must be the birds we saw before. They appeared to just pop up and land just above Chief on the other side of the hill. Chief moved with the flush and 6 more Sharp-tails erupt and I see the first two birds re-flush and follow the rest around the hill and out of sight. (Looking back, I stopped where I thought the Huns had landed and stood there as I watched the dogs work. I should of kept up with the dogs and followed them to the edge of that cover. If I had done that I would have had opportunities on that initial flush.) I was excited that we found a larger group but was worried we had blown our chance. I climbed over to where Chief was and watered the dogs. I had to come up with another plan. I thought I knew where they had flown, if I was right, it was close to where we had our original encounter. 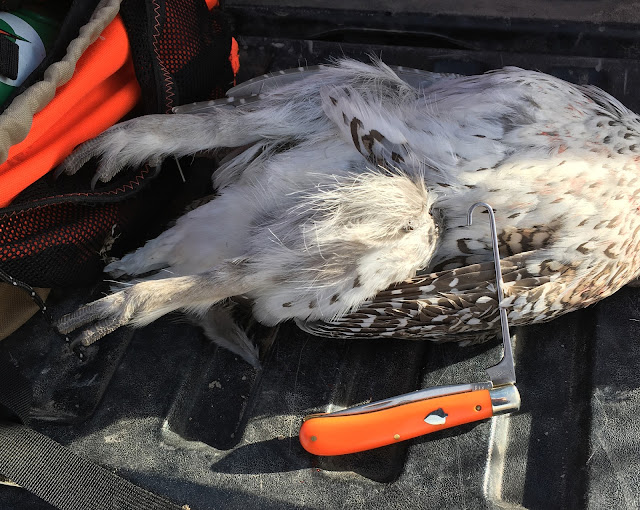 We marched over to where I thought they might be, it only took a few minutes. When we  approached the spot I saw the intensity in both dogs start to rise. Scout locked up on point and Chief backed her. I took a few steps towards them when two Sharp-tails came up, both presenting a straight-away, rising shot. I answered with my right barrel on the left bird and it dropped, "YES!", I swung on the other bird but didn’t pull the trigger. My goal was to find and kill a Sharp-tailed grouse. The second bird didn’t feel necessary at the moment. (Again, looking back I should have shot. I could have doubled on those birds.) I called “Dead Bird!” and Chief went in for the retrieve while Scout was still in hot pursuit of the 2nd bird. Chief retrieved the bird to hand and we both just sat together and relished the moment. Chief usually isn’t one to dawdle after a bird get’s killed but on that bird he laid down and watched as I turned the bird in my hand admiring the beauty of this new species we’d finally bagged. I like to think he sensed how important it was to me, plus he had worked his ass off finding it. Most likely, he was just exhausted. Scout rolls in and I show her the bird, she sniffs, then attempted to pull the bird from my grasp. We shared a sweet moment, me and the dog’s together that I will remember for the rest of my life. My first Sharp-tailed grouse.

We left for home that night to avoid an incoming snow storm. I was sad to leave and wished we could spend one more day but there’s always next year.

I don’t regret not making the move to Idaho. I think in the long-run it was best thing for my family that we stayed in Utah. My wife and kids definitely believe that. But it’s inspired me to expand my horizons to this new area and I believe that now that I’ve had a taste of what that area offers, I’ll be back.