We had an interesting hunt experience last weekend. My nephew and brother-in-law invited me to hunt grouse on their family property. It’s a beautiful spot with tons of cover and they had been seeing a lot of birds over the past month.

It snowed a couple days before, so the birds weren’t in the areas my nephew had been seeing them. We climbed up the mountain to higher elevations and once we gained some elevation we found ourselves in a large pine forest. That's where Chief started to get birdy. There was an instance that he was on a bird but the bird flew before we got to him.

The climb was steep and the trail is comprised of cow-induced moon dust from a large herd of cows that were grazing and traveling in the area. When we are about to reach the elevation that I felt we would start seeing birds, Chief comes barreling down the trail, covered in mud mixed with cow/moon dust. I notice a dark vertical spot on his left foreleg that looked wrong, so I called him to come to me. My fears were justified. He had a 2-3” gash that ran down the front of his shinbone. It was deep, you could see muscle tissue and bone. As bad as that was the most disconcerting issue was the amount of dirt, mud and cow dust that was in the wound. It was blackened with funk. I’m not sure what he cut it on but I suspect it was from some discarded cattle equipment, barbwire, feeders or something. Or it could have been a sharp stick or rock… who know’s?

We did our best to clean it out with our water bottles but it wasn’t having a ton of effect. Chief was also starting to fight our efforts, we we're definitely hurting him as we tried to help, so I took a tube of antibacterial gel out of my first aid kit and squeezed most of it into the wound area. Then took a large square cloth bandage and covered the wound. On top of that we wrapped it with more cloth bandage and lastly covered it with some vet wrap flex bandage then secured it all with a little electrical tape. If nothing else it was secured and no more dirt would get into it. 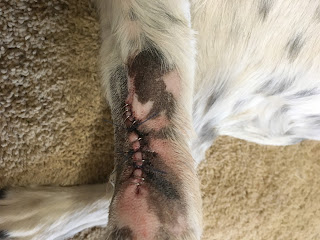 We were done hunting but miles from the truck. We had two options, either come back the way we had come or climb a little higher and get into a ravine and follow it back to the truck. We chose the 2nd option and headed up to the ravine. As we climbed Chief kept sneaking away from me and I finally conceded to let him hunt as long as he stayed close. He was moving fine and I thought what the heck. Looking back, I should have leashed him. However, not far from where we needed to turn to head back to the truck I find Chief on point in the middle of a large grove of pines.

He was just off the trail so we marched forward to get a shot. It was a great point. As we were setting up our shooting lanes the bird flushed right in front of me and I was able to knock it down with my second shot. We didn’t have any more action as we made our way back to the truck. Once there, we took the photo above and I made my way to the after hours emergency pet clinic.

I was worried about an infection and wanted to get treatment asap. The clinic looked at him and gave me a quote, I agreed to the cost and they took him into surgery. About 90 minutes later I picked him up got him home and slapped a cone on his head. He’s on a heavy dose of antibiotics and recovering. He is more active than I would like so I’ve confined him to the house and the garage most of the week. Chief will be out of commission for the next few weeks. So no Utah Pheasant hunt for him this year. It will be a good opportunity for Scout to be my lone dog in the field. We will see how it go’s. Best of luck to everyone in the chase.