Cold Day on the Mountain 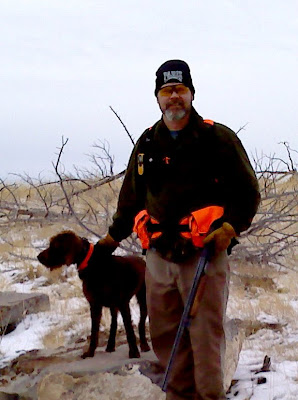 Went Chukar hunting with my brother today. The initial climb up the mountain was fine but once we were on top it was bitter cold. We were prepared for the most part and were able to cover up so we were fine. We kept a close eye on the dogs and didn't stay on top very long. If we stopped for even a moment the dogs all started shivering and shaking. The temperature was hovering in the mid 20s but there was a wind chill factor that made it very uncomfortable. It even froze up the tube of my water bladder.

Even with all the hiking we did it was a slow hunting day. Hazel busted a covey at the very top of the first ridge we climbed. We didn't see it but by Hazel's reaction we were sure of what had just happened. Hazel yips at birds after they fly. I hear the Germans breed for it. Its a crazy bark that sounds more like she's been lit on fire. I was kind of perturbed by her busting the covey but Hazel works hard and sometimes she pushes birds a little too hard. She is such a good bird finder and is getting better all the time at holding her birds but not that time. It was really frustrating last year but she has improved so much I will take some bad with all the good she does. The only other birds we saw was one single Shawn's dog Sage pointed on top and another single Hazel pointed almost at the bottom on the way back to the truck.

Hazel's was a beauty of a point all stiff with one of her back legs raised. She held that bird for a long time. Unfortunately for Hazel her master is a dumb-ass and walked into the point from the side, which is the proper thing to do, but I did it way too far out in front of her. There was a juniper tree and I thought I better get around it on the far side so It wouldn't be in my way. I was thinking the birds would fly downhill and away from us. Problem was the bird was on the opposite side of the tree closer to Hazel than I thought and it flew uphill. 2 strikes. I got all spun around and missed twice and threw a last desperation shot to no avail. 3 strikes your out. The bird was about 10 yards in front of her and I was about 20 yards out. I made a big fuss over her for her great point and I don't think she's going to hold it against me. I still should of hit it. Lessons: pay more attention to your dogs body language, (looking back Hazel gave me a look like "where you going?" when I started going too far in front of her. Take your time, move, FOCUS, swing, shoot. It may be the only chance you get all day. Still fun even with the bad shooting and the bitter cold. 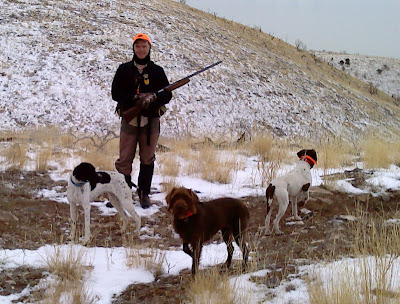