We've had a good time chasing Utah ringnecks in some of the toughest cover imaginable. I love hunting pheasants but I hate where we have to sometimes go to find them. I hate fragmites... that says it all. If I can stay out of them and still find birds I'm happy.

We have been successful and the dogs are doing really well. My young dog Chief is really coming on this year and Hazel is still awesome. Such a pleasure to hunt behind these dogs. Love every minute.

Opening weekend was HOT. High 60s. Too hot and too hard on the dogs. We got our limit of birds but it took all day to do it. It cooled off a little during the week and we were able to go out again. But is was the same deal. Too hot and it took a lot of work to get our birds again. I don't mind working hard for my birds but hunting the fragmites for them is very hard on the dog. They were very sore and beat up by the days end.

Highlight opening weekend was when Chief pointed a pair of young roosters. My brother and I were able to connect on both of them. I was stoked for Chief. I don't think he was nearly as excited. He just kept on hunting like he was saying... "Why so excited... that's what I do." I'm very proud of him. 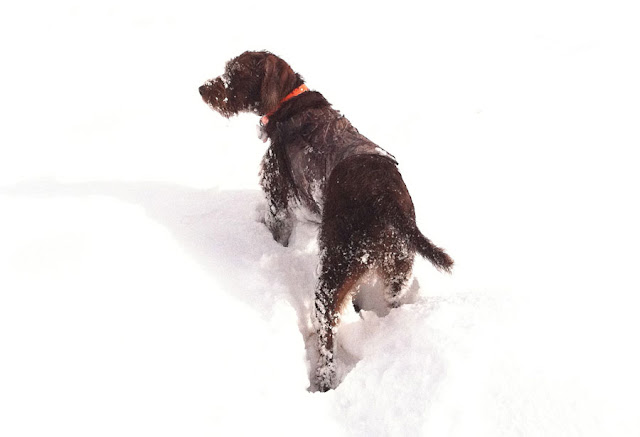 The next weekend we got a snowstorm that dumped about 6" of snow. Perfect pheasant hunting conditions in my opinion. We got out early and Got into them pretty quick. Bagged a couple old swamp roosters that never would of stuck around if there wasn't that much snow on the ground. We stayed out of the fragmites and had a beautiful morning. Fresh fluffy, deep snow makes the birds stick rather than run. It makes for a much easier hunt. Especially with hard running pointing dogs like mine.

It was nice to put some big older roosters in the bag. So far we've been bagging just the young, dumb ones while we watch the nice, big old birds flush up ahead of us out of shooting range.

Unfortunately, the first big snow means the end of Grouse season. Unless you want to snow shoe into the cover that holds them. Dogs are useless in those conditions. And if you can't hunt birds with bird dogs why go. Right? It's too bad. It was a good year for grouse. Oh well. We'll chase pheasants for a couple more weeks and then we'll head for the chukar hills. I better hit the treadmill.

During the hunt we look up at the horizon and saw a giant funnel cloud moving across the lake. I don't know if you can label this as a tornado but it was amazing to watch water swirling from the lake all the way up into the clouds. Gave us a moment of pause until we realized it wasn't coming our direction.
We don't get tornados in Utah very often. It was very cool to witness it. Camera phone picture doesn't do it justice. It was much closer than it looks it the photo. It died as suddenly as it appeared. So cool.

We braved snow, rain, sleet and pea sized hail and witnessed a tornado during this hunt. What we'll go through for a bird hunt.

I swear the things you see when your out in the field. Things that you would never see anytime or anywhere else in your life. Hunting... there is absolutely nothing like it. Stepping out of everyday life and getting to witness nature at it's wildest or even at it's most dangerous. I absolutely love it.