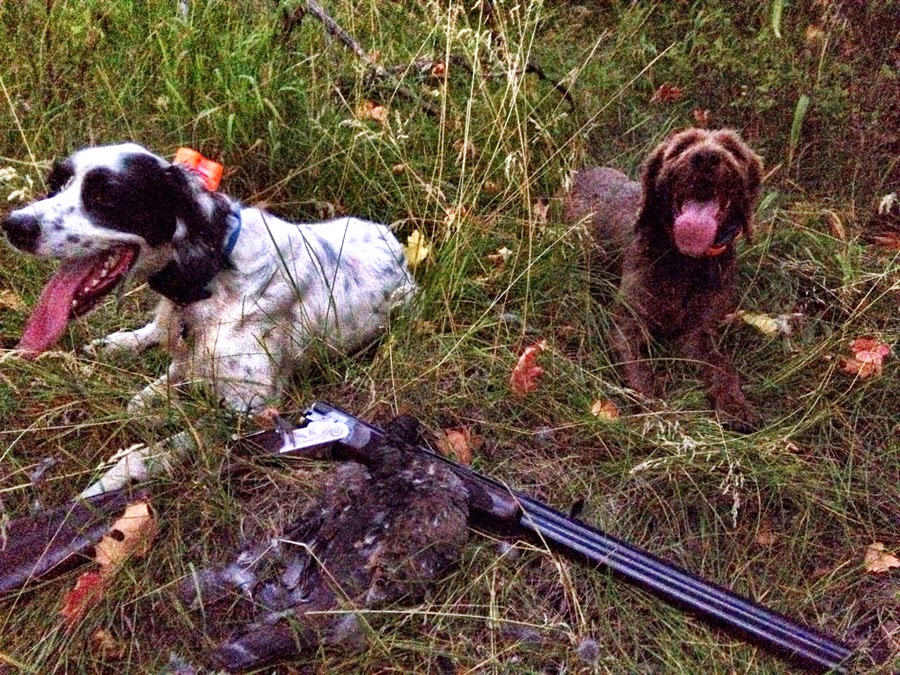 I was able to get out for a couple hours tonight to chase some grouse. I got a late start so by the time we got up the mountain to the area I wanted to hunt there was only about an hour and half until shooting hours were over.

We made our way down into the area and when we walked in to the oak trees Chief got all birdy and up popped a nice mature male blue grouse.  He flew away from me but then made a wide arching right to left crossing shot and I was just able to get a bead on him and down he went. It was a pretty good shot if I may say so.

As soon as I shot Hazel came bounding into the area leaping right past me about 4 feet in the air. It made me laugh, she looked like a deer. She was stoked! I called "dead bird" and both dogs were in pursuit. Then... nothing.  ?  They hunted dead for a few minutes but soon both dogs were over-heated and needed a break. I watered them and we looked again, still no bird. I started to wonder if I really hit it. Then I started looking. No feathers, no sign that a bird had fallen anywhere that I could see. Still we looked to no avail.  Damnit I hate losing birds, at that point I was starting to second guess if I had even hit it.

It was getting late and I wanted to try one more spot so I called the dogs and left. Leaving just didn't feel right. We hunted the other spot for about 20 minutes and got up 2 more birds but I didn't have shots on either of them. It was starting to get dark and we were about 40 minutes from the truck so I decided to head back.

Along the way that original bird really started to nag me. I never like the idea of leaving a wounded bird behind. I replayed it over and over in my mind. It sure looked and felt like I had hit it. I decided to go back and work the area again. We didn't have much day light left when we returned to the spot and I replayed it in my mind and sent the dogs to hunt dead again and still nothing. I circled the area where I thought it had fallen twice more with the dogs and still no bird. I then widened my circle and tried again. Just when I was about to give up I realized that I hadn't seen Hazel for a minute. I quietly called out to her... "Hazel?" She let out a little whine. She was just 20 feet from where I stood rock solid on point. All I could see of her was her fuzzy brown tail sticking up above the cover. I took a step towards her and up pops that grouse with an obviously broken wing. It comes back down and by this time both dogs are chasing it. It attempts to fly again and Hazel leap up and nabs it in the air by the tail and brings it down and then delivers it to hand. It had glided or ran a little outside of where I thought it was. The dogs had worked that area before but I think it was just too hot and they weren't catching it's scent. But we got it. Yep,  we eventually got it and I couldn't of been happier.

What I'm most excited about so far this season is Hazel is back on her game. I was worried about her. For whatever reason she was deferring too much to Chief last season. Not terrible but she just wasn't acting like herself. This season she's behaving more like herself or the old (pull your hair out but keep on your toes because she could do something amazing at any second) Hazel. I missed that fire she always had. So far she's looking like her old aggressive bird finding self and I love it.

Above is the terrible picture that I took right as the sun went down.  There was hardly any light left so it's awfully grainy. I'm so glad I went back to look again. It was a good lesson to never give up and to trust the dogs and make sure to give them every chance to do their job. They were pretty happy about it to.
Labels: Bird Dogs Fall Grouse Hunting