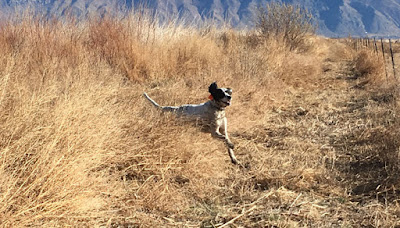 More pheasant hunting last weekend. Our success has continued. We were fortunate enough to limit out again. It’s been a lot of fun and we’ve been lucky. However we have put in a ton of miles in pursuit of these birds. Plus we have a pretty good pack of dogs that are finding these birds for us.

I’ve really enjoyed hunting behind Hazel the pudelpointer this pheasant season. She loves pheasants and she’s pretty good at it. It’s a strength of hers and at 9 years old she has seen it all and knows how to work and find these birds. She has worked herself into shape and is really hunting hard and doing all I could ask of her.

Last week I voiced my frustration at losing a couple birds. This week Hazel found a wounded pheasant in the same area we lost one the previous week. I was standing there talking with my son when suddenly, like a bolt of lightning, Hazel flies past me in hot pursuit of something I couldn’t see. I was worried it was a cat or some other critter but soon I figured out she had a wounded pheasant. It juked an jived in the waist high cover with Hazel in pursuit, hopping like a jack-rabbit and voicing her excitement. Finally she got a hold of it after stomping on it’s tail feathers to slow it down. It was a cool retrieve to watch. She was so fired up.

Soon after she found the last bird of the day in some thick tamaracks and retrieved it to hand. It was a good day for her and overall it’s been a great pheasant hunt this year. Hazel is now 9 years old, I’m starting to see her slow down and I see her recovery time after a hunt get longer and longer. I can’t predict the future but my guess is I only have a couple more productive seasons with this girl. That’s a really sad thought.  She’s a fun dog and I’ve really enjoyed owning her. She’s taught me a ton. Lessons I will use on every dog I own for the rest of my life. She was a hard one. The first couple of years were tough and required a ton of patience (which I’m short on) but once I let go of all the things I thought she was doing wrong and started enjoying what she did right, I realized I had one hell of a hunting dog. She won’t win many style points or trial ribbons and she may flush a bird or 4 she should of pointed, but she puts birds in the bag. She's pure hunting dog and lives to hunt. She has so much personality and communicates better than any dog I've ever seen. Mostly because she is so vocal. If she's on a bird in heavy cover she will bark ( it used to drive me crazy but I've found it quite useful on many occasions). If she's excited she'll bark, If she's confused she will come and seek direction. It's pretty cool and makes the hunt more enjoyable to have such a hunting partner that works with you in this unique way.

My son and her were born only a week apart. My goal is to have him shoot his first bird over Hazel’s point. I don’t know if it will work out that way but that would be an awesome final chapter to her career. time will tell.

Again, it's been a really enjoyable hunting season. It's been a blast to work these dogs and spend time with my brother, my son and friends. Just to be out in it, doing what we love to do. We are blessed to have these opportunities. Days like this make up for those days you don't see a thing and you feel like your wasting your time. Wait... scratch that.. I never feel like I'm wasting time while bird hunting.