My brother and I have been talking about this trip for years and finally this year it happened. We had such a great time. To leave home, work, and all responsibility behind and have nothing to do but hunt for 5 days. It was awesome.


We ended up in the northeast corner of the state. An area neither of us knew anything about. We went in flying blind. However, the morning of the opener we visited the local DWR office and the one of the area wardens happily walked us through the South Dakota hunting atlas and showed us several great spots to get us going. It was time well spent.

First we tried some CRP and Walk-In-Access areas. The first field was a bust. Nothing…. “we traveled all this way for this?” 2nd field…. awesomeness, we saw several birds and I blew a beautiful opportunity.  Shortly thereafter Hazel my pride-and-joy Pudelpointer had a point on a nice rooster that I was lucky enough to bag.

After that the action was pretty consistent. We didn’t bag a ton of birds nor did we limit out everyday but we saw enough to keep us happy. It was a ton of fun and I can’t wait to go back. The dogs did great and all had their moments where they were top dog.

My dogs were trashed by the end of the week and are resting and healing on a thick bed in my back yard. They did great and I was proud of both of them. Chief became disoriented a couple times and got himself lost, but we quickly found him. Hazel had a blast and hunted as hard as I’ve seen her hunt in a while. She loves pheasant hunting and I think it’s what she is best at. She was yapping it up all week. 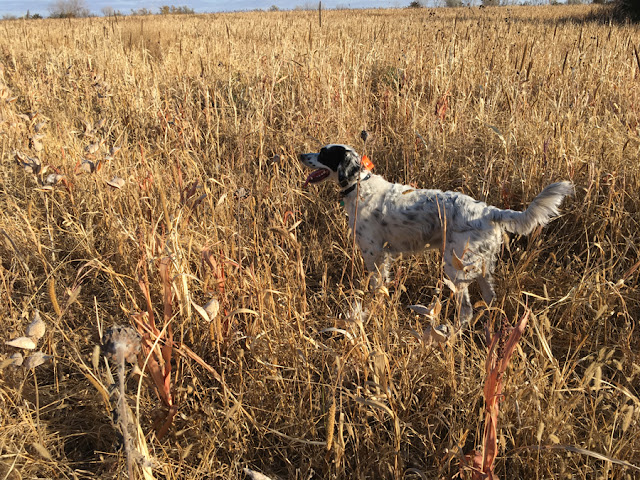 Chief had his moments as well. The last day we were there it rained and Hazel was foot-sore and done for the hunt. So I had a day with just Chief and we had a great time. He was foot-sore and beat up from all the cover he busted through through out the week so I armored him up with a neoprene body suit  and booted his feet. When I put him on the ground he ran like it was the first day out. He had some beautiful points a put up some birds. Within a couple hours we we’re soaking wet and tired and called it a day.

Shawn's shorthairs also had a great hunt and had some great moments and awesome retrieves. His older female Sage is still recovering from a litter of pups she had late last summer and she showed to have more stamina then the rest of the dogs. She's one tough dog. I can see why Shawn is so proud of her and her daughter Oakley.


It was a great week and I thank Shawn for putting it all together. I’m already excited to go back. It’s amazing the amount of land available and dedicated to bird hunting. They really make it a priority and it shows. Even on a down year we had a great time. We met a ton of great other hunters from all over the country. It was so fun to be with these people and just talk dogs and hunting with them. Not one of them acted the A-hole. Everyone was friendly and helpful. Made me proud to be a bird hunter.

I am inspired to do more of these out of state hunts. We talked about Montana and southern Arizona in the next few years. I’d like to give South Dakota or North Dakota another go as soon as I can. I would also love to go back to Michigan and grouse hunt. There really isn’t a better vacation in my opinion. It was so much fun and I would recommend it anyone who has the time or the means.