It was an exciting weekend for me and the family. We brought home the new dog on Friday.
Her name is Scout and she's a little girl at only 7 weeks old. She's super cute, a little ornery, and just full of it. For the first time ever, the kids have put away all their shoes into their closets. Scout is awesome and just what I was looking for.

Friday night we picked her up and made the drive home from northern Utah. She was super sweet on the ride home and didn't give us any issues. That night I slept with her on the couch. I didn't have the heart to crate her on her first night away from home so we cuddled up on the couch. We were up and down most of the night and once the sun came in through the windows at 6:30 am she was ready to rock.

Saturday was our first full day together and we had a lot of fun. We had friends and family stop by to visit and fawn over her and I drove her over to visit with my dad. She was great and took it all in stride.

Crate training has been less than fun. She's quite the screamer. It's incredible the volume her little body can produce. The 1st night it took about 20 minutes for her to calm down. I got up and let her out about 3:30 am and we had another scream fest for about 15 minutes. She woke up again around 6 am and let everyone know that she was not happy with the situation. She went back to sleep in about 20 minutes and I got her up and let her out around 7:30am. Sunday night was about the same but the 3:30 wake up was much shorter. Thank goodness because the kids need to be up early for school. Hopefully she gets the drill sooner than later. Overall I feel that's pretty good. I've heard of dogs that that take hours to calm themselves down the first few time that they've been in the crate.

Today she's upset because I have her out in the yard with the big dogs by herself. She comes to the back door every 20 minutes or so and let's me hear it.  I've been going out every hour for a few minutes to let her know we haven't abandoned her. I have to work so I can't be on top of her every minute but I've taken every precaution I can to keep her safe and secure. Luckily I work from home so I can constantly check up on her. I set a timer for 15 minutes and peek out on her to make sure she's doing alright.

The big dogs are slowly warming up to her. I've noticed both dogs playing with her for a few moments throughout the day. Hazel hated Scout's guts at first and didn't want anything to do with her. She got all growley and rough with Scout right off the bat when we brought her home. I lightly reprimanded Hazel and she's wanted nothing to do with Scout until today. Chief is usually a very curious and inquisitive dog but he's being very cautious and almost timid around the pup. It's probably a good thing and they will eventually work it out.

I have a retrieving drill that I do with my older dogs where I throw out a bunch of bumpers and let them race to the bumpers and bring them back until the yard is cleared. Chief is good for 1 or 2 and then he will just let Hazel clean up. Hazel loves this game and is always fired up when I start pitching the bumpers.

So last night I lined up Chief and Hazel and Scout kind of waddled up to watch the show. I thought, "what the hell" and lined her up as well. I commanded "Dead Bird, Fetch" and released the dogs and they raced to the other side of the yard to grab their first bumpers. Scout ran behind them as fast as she could following Hazel as close as she could and watched the whole drill go down. She was as stoked as Hazel. After all the bumpers were delivered I shook a small dokken quail bumper I have in front of Scout and tossed it a couple feet in front of her, just to see what she'd do. She hopped over and tried to pick it up but it's still too big for her to get her mouth around. She rooted around it and found the throw string and grabbed onto that and dragged it back over to me. It was a sweet little moment and it reaffirmed why I wanted another Pudelpointer. I love these dogs.

Update: 09/18/19
Well we are nearly two weeks in on owning Scout and we see a little progress every day. She's getting into the swing of things and has adapted well to her new life with us.
I thought I had the potty/house training thing licked and then she pee'd all over the kitchen this morning. I was calling for her to get outside and she must have thought it was easier to squat where she was at that moment.

Crate training is going well. When I crate her at night she doesn't fuss at all anymore, but come 7am she let's us hear it. I'm letting her take a last potty break between 11:30 - midnight and I get up around 4:30 am to give her a quick break. She doesn't cry at all anymore or at least until she wakes up in the morning.

Her play biting is getting better. She doesn't bite me much anymore and the kids are learning how to control her a little better.

She's a good little retriever and has jumped right into the play-fetch sessions we do each day. She will retrieve everything from a toy pheasant, paint rollers, tied up bandanas, rope toys, to a little quail dokken bumper that I mentioned above. It's just in her. I keep the sessions short and sweet and always try to end on a high-note.

I set-up a wing on a pole just to see how she'd react. She chased it some and flash pointed a couple times but she doesn't seem to love it the way Chief and Hazel did as pups. I'm not too worried about it. I'm sure the prey-drive and point will come out in time. 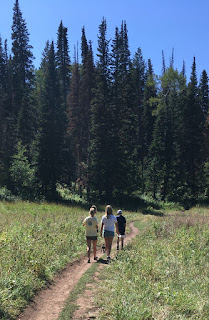 She's super smart and is going to be a hand-full. She's taught herself a few things that I will need to break her from. In particular she discovered that we feed the cat on the front porch. Any chance she gets she sprints around the front of the house to get a few mouthfuls of that sweet cat food before I can scoop her up.

She's also pretty aggressive towards the other dogs at feeding time. I have to baby-sit her or she will kick the older dogs off their dishes and scarf-up as much food as she can before I pull her back and place her in front of her own dish. I was hoping the older dogs would correct her themselves but that doesn't seem to be happening so I will need to come up with a solution to keep her on her own dish during feeding time.

Everything seems to be going well. And I'm trying to introduce her to new things everyday. We've been taking her for short jaunts around the neighborhood on the leash and took her up into the mountains on Sunday. She's doing great. She's bold and not easily frightened. Once we get her next rounds of shots we can really get her out into the world and introduce her to everything. 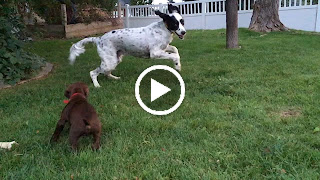