It was another early-morning opening day this year. The grouse season opener landed on Labor Day and the temps were going to threaten the 90's by mid-day. I spent the previous Saturday giving the dogs their pre-hunt trims, packing my vest, sorting shotgun shells, charging collars and greasing up my boots. I was excited for the start of this hunting season for multiple reasons. This year I'm sporting a new bird vest from Tenzing, a new shotgun from CZ USA, and a new Dogtra Pathfinder. All that plus the regular anticipation that comes with the opening of Grouse season had me bouncing around all weekend.

Monday morning came and we got up well before sunrise to head to one of our favorite grouse spots. Once we were there the area was pretty packed with elk hunters so we had to drive a bit to find a spot we felt would allow us to work without bothering anyone.

We geared up, released the hounds and hit the cover hoping to get into birds before the sun came up and cooked us out. Within about 5 minutes I saw Chief and my brothers GSP Oakley getting birdy in front of Shawn. Chief then hustled up a line that took him to the top of a ridge. Oakley took a lower angle and ran into our first covey. I was a couple hundred yards away to the the north of them with Hazel and was just an observer. A couple birds flushed wild but the majority of the covey held long enough for Oakley lock up on point. Within seconds the Dogtra Pathfinder app on my phone pages me to tell me Chief is on point about a 100 yards in front of me. I start rushing towards Chief but before I can get to him the initial covey Oakley is pointing flushes, Shawn shoots twice dropping a single. I was watching Chief as those birds flushed and he was solid until Shawn's second shot and he took about 4 steps that caused the majority of his covey to go up, he then completely broke down and ran through the rest of them. I wasn't too upset it was the first action of the year and the circumstances were tempting. It was a cool sequence to watch though. There was a lot of action in a small area going off at once. It was a great way to start the day.

As soon as that initial action was over the sun popped up over the mountain and it was instantly heating things up. We decided to head towards a little watering hole that we know about to help cool down the dogs. Once the dogs were nice and wet we dropped down into a large ravine and followed it down for a few hundred yards when Oakley had her second find of the morning. She held them until Shawn and I could get in position, then Shawn released her. Nothing happened for several seconds so I released Hazel too. Finally, a large covey of Duskys started popping up on all sides. I picked a single that was squirting low and straight away from us and raised my new CZ Bobwhite 20 gauge and dropped it. Another young bird popped up on my right so I swung and pulled my back trigger and dropped it as well. I'm starting to really like this gun. 10 birds came out of that covey and we had bagged 3 so we moved on to find a different group. 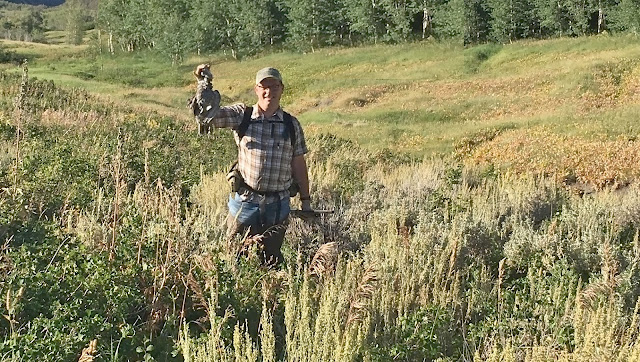 Shawn and Oakley moved into the aspens while I hung back looking for a single we saw fly into a bushy area. A few minutes later I heard 2 shots from his Franchi I-12 Upland Hunter and he had another bird in the bag. We met up at a stream and once the dogs were watered we headed back to the truck.

On the way back we came into a wet meadow/clearing area with a bunch of willows and Shawn announced he smelled skunk. I kept trudging forward and suddenly I was smelling it to. It was very strong and very close. I called out to ask Shawn if it was one of the dogs, I was dreading his answer. "It's not Oakley." I called over Hazel and she was clean. My suspicions were justified, Chief came my way and it was pretty clear who we were smelling. It must of happened right in front of us because I was watering him just moments before this all went down. Oh well, he needed a bath anyways. This makes 2 years in a row and the 3rd time in 4 years that he has been sprayed. And the 4th time in as many years we had a dog sprayed by a skunk on the opener. Kind of funny.... kind of annoying since my dog has been responsible for 3/4 of these occurrences. I have to admit it's kind of fascinating that these critters have evolved to have such potent chemical weaponry attached to their bottoms. My new Dogtra collar smells so bad I had to double-bag it in ziplock bags to keep the smell down. It still stinks even after several scrubbings. 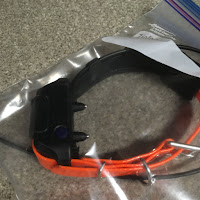 We had one more contact at the end of the climb back to the truck where Hazel got all birdy and was sliding into a pretty little point when the bird flushed. The bird presented a nice left-to-right crosser. I missed with both barrels behind the bird while fumbling with my double triggers. I will need to get used to them.

Overall it was a good opener. We had plenty of birds to shoot, the cover was thick and the dogs did pretty good, at least Hazel and Oakley did. Chief was a little too wired for my liking but it was the first hunt of the year. He will settle in.

Take aways from the opener are:

1) I really like the CZ Bobwhite thus far. I need to get used to the double triggers though. On clays it's not a problem, but on birds. I apparently lose my mind and my double trigger abilities.

2) The Dogtra Pathfinder works as advertised. I really enjoyed using it. It integrated well with my phone, was simple to use, and with my phone in airplane mode didn't drain my phone much at all.
My only problem was I bought a pouch for this system that connects to my vest to hold my phone. That made for a poor set-up, it caused for way too much fumbling around trying to get the phone in and out of that pocket. and I ended up just having the phone just tucked inside my shell pocket. That worked well but I will need to purchase some kind of phone case with a lanyard to connect it to my vest or I will eventually drop my phone, which would be a bad thing. But the system worked great. Paired with my Apple Watch it's a great system. The watch doesn't have an app (yet) but it vibrates and notifies me when Chief is on point, its like receiving a text, that was a pleasant surprise.

3) My new Tenzing vest is a keeper. I am very happy with it. It's very comfortable and has tons of well thought out features that make it a pleasure to wear. I will write up a review shortly.

And here is my first picture of the new addition to the team. Her name is Scout. She's another Cedarwoods Pudelpointer and I'm picking her up from the breeder this weekend. Isn't she gorgeous?
I can't wait.