Getting a new Pudelpointer pup recently has shown me that this breed is still pretty much an unknown outside of the upland hunting community. I've been asked what kind of dog she is by pretty much everyone who has met my pup. When I say "she's a Pudelpointer" almost every time the response is, "oh, she's a mixed breed", then I have to go and explain that "No, she's not a mix, pudelpointers are an old German gun dog breed that's been around since the end of the 1800's." People are naturally curious and conversations usually go a little deeper and I explain the origins of the breed. Pudelpointer history. Which is cool because I like talking about them and sharing what I know and why I love these dogs so much.

A couple of people have asked me, and not just recently, when they see my older dog Hazel, "Why a Pudelpointer?" Why go out of your way or spend the money for this breed of dog? Why not a shorthair, wirehair, brittany, pointer, griffon, lab, or any other of the many gun dog breeds out there? Well, I don't really have a great answer. I like all those dogs, and any of them could fulfill what I need out of a bird dog. I've just always been attracted to the Pudelpointer.

When I was just a kid, probably about 10-11 years old I really started to get obsessed with bird hunting. We had a pointer named Dingo and I loved following her around the orchards, foothills, and hollows around our house. Watching her point quail or pheasants was always a rush and I was hooked at an early age. I couldn't wait to start hunting for myself.

About that time my good friend Matt got a black lab named Magic, I thought that he was the coolest dog ever to walk the earth. I never saw him hunt but I heard stories and every time I was around that dog I became more and more infatuated with the thought of owning my own lab. I wanted a black lab and I wanted it bad. I started buying magazines just because there was a Labrador on the cover, I bought a bird dog training book, that I still have, because there was a huge chapter on the Labrador retriever and how to train them. I decided, that someday I would have one. 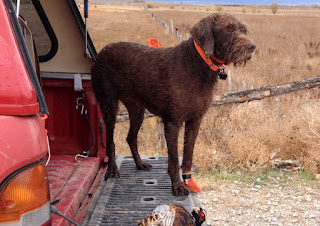 Dingo was my oldest brother Rick's dog but he got married and left her with us so she became our dog. Shortly thereafter, he bought himself a German Wirehaired Pointer male pup named Max. Like a fickle teenager, I lost interest in Labs and instantly became obsessed with wirehairs. Again, I found a training book at the local sporting goods store,  in that book there was chapter on the German Wirehaired Pointer. I got a $10 bill for Easter that year and I spent it on that book and probably read that chapter on wirehairs 500 times. I had put the universe in motion. I would have me a wirehair.

Now in that chapter of that book it explained the origins of the German Wirehair. Foremost among the breeds that made up the wirehair was this funny named dog, the Pudelpointer. That was the first I had ever heard of them and remember laughing about it. "Pudelpointer!? What the heck is that?" My only experience with anything "pudel" was the neighbors little white toy poodle, and I hated that dog.

Well, my older brother's dog Max had gained quit a reputation here locally and other wirehair owners began to take notice. He was a handsome dog with a perfect, classic wirehair coat. Black and gray ticked. He was an excellent hunter and Rick started to be hit up to stud him out. After a couple successful go's Rick started to advertise locally. I believe he was getting about $250 for a stud-fee. That was good money back then. Rick ended up with a client that offered pick-of-the-litter instead of the stud fee. Knowing I was obsessed, Rick offered that dog to me for mowing his lawn one summer. I took him up and got my first, very own bird dog, Gretchen.

Gretchen was a nearly solid black dog with a rough coat and a ton of spunk. She taught me a lot but she had one fault. She hated water. She wouldn't swim for anything. I'm not sure why but my dream of a versatile dog was dashed as soon as I realized she wouldn't get into water. I ran her in Jr. AKC tests and she was awesome but I knew I would never be able to advance because of this one thing. If I was a better trainer I may have been able to correct it but I was just a young teenager and I had no idea what I was doing. She was a good dog though,  I have a ton of great memories hunting pheasants, grouse and quail over her. 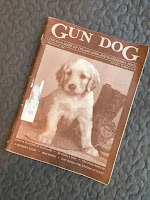 When I was about a sophomore in high school I got a subscription to Gun Dog magazine for Christmas from my father. About 5 issues in, there was an article named "Rare, but Proven" by Dave Duffy, it was about that funny sounding breed, the Pudelpointer. That was the first time I had ever seen a picture of one, or had read anything on the subject. I thought it was about the coolest looking bird dog I'd ever seen. It looked like a wirehair but with a more even rough coat and a solid color. The article is attached if your interested to download it, It should be sized big enough that you can read it. The author wrote a few things that really intrigued me. In particular - "Then of all the versatile breeds, the Pudelpointer impresses me as coming closest to the drive, application, intensity, range, and stamina of a good pointer in the uplands. They move better, hunt with more verve and purpose, and have a more independent bent than the other versatile breeds".  Mr Duffy's words, not mine but what's not to like about that description. Somehow that magazine survived all these years. I read that article and thought to myself, "Someday, if I'm in the market for another dog, I'm going to look these up".

Gretchen lived to be about 13 years old and as I grew up and went to college I became more interested in other things besides bird hunting.  Work, college, partying, dating, music, all took time away from my upland hunting. We still hunted but not nearly as much as I did when I was in high school. After Gretchen passed, I inherited a goofy yellow lab mix from my sister. The labs name was Cindy. Cindy had no interest in finding birds but if you shot one over her, she was a good retriever and one of the best pets I've ever had. She was an amazingly sweet dog. About that time my career started and I had little time for much of anything else for a few years as I tried to create a foothold in this world for myself. Eventually, I met my wife, got married, and started a family. The only hunting I did was an occasional canned pheasant hunt with my brothers.

Now it was about that time that I learned that a person needs to do some things for themselves and find the time to just get away from the pressures of it all. Life had become pretty overwhelming for me and I needed an outlet. After some soul-searching I realized that I had left a part of me behind and something that I really enjoyed was no longer in my life. Hunting was what I was missing. That's when I got back into the uplands. I went out a few times without a dog. I got a Ruffed grouse, a pheasant, and oddly enough a Canadian goose during an attempt to chase Chukar. Once again, I was hooked.

It was time for a new bird-dog. My dog at the time was a 130 lb Bullmastiff named Zoe. Another good family dog but not a bird dog. She was getting old and I felt like the window was open to find a new dog. I started doing research on different breeds and breeders but that idea of a Pudelpointer was always in the back of my mind. After a little research, I loved what I saw on the Pudelpointer. What I was reading about the breed seemed like a perfect fit. I quickly landed on Cedarwood Gun Dogs in Idaho, I contacted Mr. Farris, and the rest is, as they say... history.

After owning a Pudelpointer I can't imagine not having one in my life. Since owning Hazel I've met a few other hunters that own these dogs and I've yet to meet a lemon among any of them. They are solid, dependable dogs. Hazel is the best retriever I've ever owned. She obsessed with birds and has found her share throughout her career. She has never been the most solid pointer but she puts birds in the bag. If I was a better trainer or if I did things a little different when she was young, I know we could have worked through it. She points way more than she doesn't. She's got a lot of prey-drive and if a bird tries to move under her nose more times than not she's putting it up. She's an effective dog and I'm always happy with her work.

Hazel is turning 12 tomorrow. I can't believe it. I'm dreading eventually losing her. I love that little brown dog so much. She's given me and my family a lot these last twelve years. If only there was a time machine that would turn your old dog back into a pup. She's that dog I dreamed about all those years ago as a boy. I'm so glad that everything worked out so I could eventually get her. She's awesome. I'm hopeful my little pup Scout will be the same.

That's the long story and why I own Pudelpointers.